Talk of Apple turning to OLED displays for its mobile devices has arisen repeatedly for many years now, and those rumors have received another update with a claim from The Korea Herald (via Macworld UK) that Apple Chief Operating Office Tim Cook recently visited South Korea to discuss the possibility of adopting an active matrix OLED (AMOLED) display from Samsung for the next-generation iPad, a device the report claims could be released before the end of the year.

"Apple wants to tap into Samsung's AMOLED technology for an upgraded version of the iPad2, considered as many as the iPad3 that is likely to be launched toward the end of this year," a source told The Korea Herald on Wednesday (May 25) on condition of anonymity.

Samsung is already one of Apple's primary suppliers for its mobile devices, although the two companies are currently embroiled in a legal dispute begun when Apple filed suit against Samsung for allegedly copying Apple's technology and designs with its "Galaxy" line of smartphones and tablets.

But while the latest report claims that Apple is looking to Samsung for AMOLED technology, a previous report from a different Korean publication claimed that Apple was interested in the company's "Super PLS" technology for more traditional LCDs in the next iPad.

tekmoe
Apple to Samsung - "Your products are too similar to ours. We are going to sue you."

NewYorkRanger
Why would Apple release a new iPad this year when the current unit is still selling so well? It's almost June and they are still hard to find. The competition, while eating into market share, shouldn't be that huge of a concern at this point since Apple has such a huge lead when it comes to consumer confidence and desire.

I'd wait until at least Q1 2012, why cannibalize sales of the iPad 2 so early? There is this huge misconception that people will not buy iPad 2's as x-mas gifts, I just don't see that holding true.
Rating: 9 Votes

Apple to Samsung - "Your products are too similar to ours. We are going to sue you."


Apple to itself: "We are in court with Samsung right now, but they are making these excellent displays. Should we buy them or not? " Answer: "Of course we buy them, as long as they are good and at the right price and quantity."

Samsung to itself: "We are in court with Apple right now, but they are offering us tons of money for our displays. Should we sell them or not? " Answer: "Of course we sell them, as long as we make a good profit doing so. "
Rating: 7 Votes

Apple to Samsung - "Your products are too similar to ours. We are going to sue you."

Corporations take things a lot less personally than people. Samsung makes a lot of money as a supplier.
Rating: 7 Votes

1) No Pentile. Pentile is a bastardization and looks horrid for text and high contrast boundaries.

2) Does not look any worse in high light conditions.


Time to update some old information regarding AMOLED's and Pentile sub-pixels.

The display in the new Samsung Galaxy S2 is Super AMOLED+. The "+" part refers to the true RGB sub-pixel arrangement, not the RGBG pentile arrangement they used in the original Galaxy S. 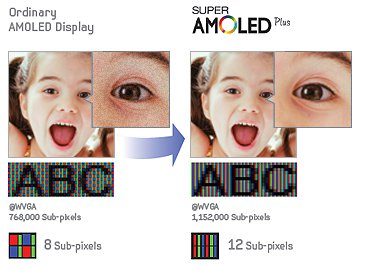 The biggest problem with the otherwise excellent current iPad display is how badly it performs in sunlight. The LAST thing we need is a switch to AMOLED -- those things are practically invisible in sunlight -- they make Apple's IPS LEDs look like eInk when it come to sunlight performance.


What the heck are you talking about? My fiancé has a Samsung Focus Win7 phone, and I swear it's the only phone you can see without squinting and cupping your hand beneath the blazingly bright Arizona desert sun. It performs so incredibly beautifully in direct sunlight it's not even funny. Super AMOLED all the way.
Rating: 5 Votes

As mentioned already, iPad 2 is selling like hotcakes. Unlikely to be a new one this year.

Also, OLED also can't be produced at a quantity large enough for Apple products the last time I checked.

NoNothing
AOLED is OK if they get some things worked out.

1) No Pentile. Pentile is a bastardization and looks horrid for text and high contrast boundaries.

2) Does not look any worse in high light conditions.
Rating: 5 Votes

I don't know either but my friend in Apple R&D said there were internal talks about releasing the iPad 3 alongside the next iPhone in September. I'd think waiting would be best too.

drumrobot
This rumor is incredibly old... the iPhone 4, the iPad, and the iPad 2 were all going to have OLED displays.
Rating: 4 Votes