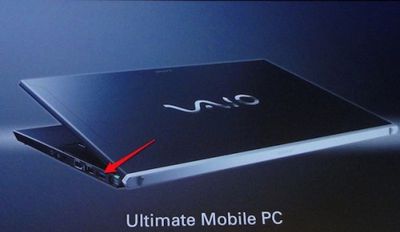 Engadget and Gula Digital report that while Sony is planning on implementing Thunderbolt in their upcoming laptops, the company will be using a USB connector rather than a DisplayPort connector.

Look closely at that picture. See that Type-A USB jack? The one with the blue stripe sandwiched between the round AC jack (with its green light) and VGA and HDMI ports? Yeah, that's Sony's Thunderbolt implementation according to a trusted source.

Engadget seems confident in their source, and Gula Digital's sources are independelty saying the same thing: Sony will use the USB interface, not mini DisplayPort for their Thunderbolt implementation.

As Engadget notes, we're not sure how this will be allowed. Thunderbolt's original implementation did use the USB connector, but the USB Implementors Forum officially frowned on this behavior by stating that "USB connectors are not general purpose connectors and are not designed to be used in support of other technology applications or standards or as combo connectors." It is believed that it is only due to their objection that Apple and Intel decided to use the mini DisplayPort as the Thunderbolt interface.


Did you read the OP? They used a different connector as the USB forum said you couldn't use a usb connection
Score: 25 Votes (Like | Disagree)

haibane-rakka
I should probably care about the thunderbolt thing more than I do but the only thing I was thinking when reading this was "Why are we still putting VGA on laptops?"
Score: 21 Votes (Like | Disagree)

* USB is needlessly larger, and

* USB is symmetrical on the outside! You can’t tell by feel (or eve a quick glance) which way a USB connector goes in. Thunderbolt, being tapered, is just more usable.

I get USB cables the wrong way around on the first try about 1/3 of the time. Sure, most are labeled, but not all in the same way. And what if the port you connect to is sideways, or on a free cable or brick with no orientation? Nothing beats a connector whose very shape—visible and tactile—only has one way to go.

I don't think I have ever seen a mini displayport on anything other than Apple hardware.
I have seen USB on, well, every PC since 2000. Well done Sony. Stick to common ports.

Thunderbolt is for displays, among other things; in fact, initially it’s the most common use of Thunderbolt. And USB is not common for displays. DisplayPort is more so. (And Apple’s not the only one to use mini DisplayPort. The “original” DisplayPort was needlessly large, and luckily Apple stepped in quickly with a better standard, for use by all. Not everyone uses it—but computing is better when they do: your computers can then all share the same display connector even when they’re too compact for the early large-size connector.)

Blue USB is usually a usb 3.0 connector. More than likely its a mislabeled pic.

Blue USB is usually a usb 3.0 connector. More than likely its a mislabeled pic.
Score: 17 Votes (Like | Disagree)

USB ports on a advice are always oriented the same way. So when you plug in the cable you will always plug in the connector with the USB logo facing up. If you take 2 seconds to actually look at the connector you wont have to randomly guess.


Just spend 25 seconds under my desk. On my Mac the 'bottom' of the cable faces right. On my Dell the 'bottom' is on the left. So they're exactly the opposite of each other.

Whenever I hear someone say "always" in regards to computers I can be pretty sure they haven't checked many places.
Score: 14 Votes (Like | Disagree)


uh, no, they are the ones who helped make it
Score: 13 Votes (Like | Disagree)
Read All Comments