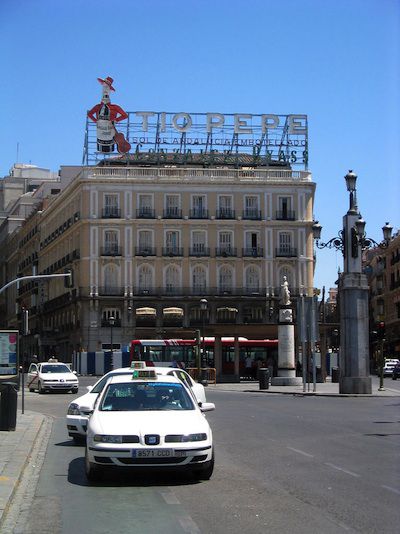 Spanish newspaper El Pais reports [Google translation] that the mayor of Madrid has announced that Apple will occupy the entirety of a landmark building in the center of the city on the Puerta del Sol, snapping up 6,000 square meters (~65,000 square feet) of space. The building, famous for its large neon sign advertising popular sherry brand Tio Pepe that has temporarily been removed for restoration during the building's renovation, includes seven floors plus a basement and was built in 1863.

Apple's interest in the building is not new, but previous reports had suggested that Apple would occupy only the lower one or two floors with earlier hotel uses being maintained on the upper floors. Today's announcement reveals, however, that Apple, the building's owners, and the city have come together to forge an agreement that will see Apple taking the entire space.

It is unlikely that Apple will devote the entire seven floors to retail store space, presumably using some of the upper floors for office space to support the company's operations in the region, so it is currently unknown just how large the retail space will be. Apple's largest stores currently check in at up to around 25,000 square feet. Restoration work on the building is scheduled to wrap up by October or November of this year, with the Apple retail store opening at an unannounced date after that time.

Apple currently operates two retail stores in Spain, with one of them being a typical mall-based store located on the outskirts of Madrid.

I am even more surprised to see Apple considering the opening of a store in Spain, one of the world champions of unemployment and recession - there are surely many other areas in a number of developed and emerging markets with MUCH higher purchasing power...Spain is not one of them.

Recessions and economic downturns are a great time for corporations with cash to expand and increase market share/presence. Among other things, because property and assets are much cheaper than when the economy is booming. If the Spanish economy was going at full speed now, that place in the center of madrid would cost orders of magnitude more. As it is, Apple is getting a great real estate deal, in the center of one of Wester Europe's largest cities.


p.s.: No offense, I love visiting Madrid - but it was more of a question on the best places for prospective Apple Stores...


Yawn, these "no offense, I have nothing against (insert minority name here), I have a friend who is (minority name), I just don't want a (minority name) dating my daughter" arguments are such a predictable chickeshit way of trying to get away with BS.
Score: 3 Votes (Like | Disagree)

Kaibelf
Apple has only a handful of retail outlets in major European cities, and each one is usually in a particularly historic and beautiful building, which they go to great lengths to maintain aesthetically. The Paris store, for example, is unlike any of the mall-like stores that you may find in an American suburb. That in itself makes it a big event. Huge store, special location.
Score: 3 Votes (Like | Disagree)

potatis
why not transform Valley of the Fallen to an Apple retail store?
Score: 3 Votes (Like | Disagree)

Darth.Titan
I do not believe that Tio Pepe will be returning...
Score: 2 Votes (Like | Disagree)