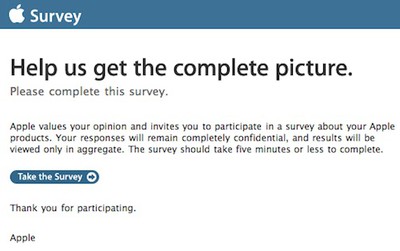 Several MacRumors have informed us in recent days that they have received email invitations to join "Apple Customer Pulse", a program designed to allow customers to provide survey feedback about their product purchases to Apple.

Apple values your opinion and invites you to participate in a survey about your Apple products. Your responses will remain completely confidential, and results will be viewed only in aggregate. The survey should take five minutes or less to complete.

According to one of the readers who received an invitation, the program allows users to receive up to two surveys per month to assess their usage of and thoughts on Apple products on an ongoing basis.

Apple has occasionally reached out to customers for survey feedback on their purchases, but this new program appears to be a more extensive, ongoing market research project for the company. The Apple Customer Pulse site is being administered by Socratic Technolgies, a San Francisco-based market research firm that has worked with other tech companies such as Adobe to gather customer input.

According to Whois database information, the applecustomerpulse.com domain was registered in late January, although the site did not appear on reporting services such as Netcraft until last month. The domain is registered to MarkMonitor, the branding company that Apple routinely uses for such purposes, and the administrative contact is Apple's Ken Eddings, who has appeared on many such listings including the one for me.com that revealed Apple's plans for a transition from the company's .Mac service to the current MobileMe. The new survey site is, however, hosted on Socratic's servers and not Apple's.

No thank you. Soon to be dead technology. Havn't you heard, everything is going digital delivery?


Not all of us want all digital delivery, especially with more and more ISP's having bandwidth monitoring and capping. And I d enjoy movies in BluRay for quality, and a nice backup medium. In short, a Blu-Ray drive would be welcome, even if they just updated their external superdrive to include blu-ray
Score: 4 Votes (Like | Disagree)


I'm sure the people working in the stores making barely over minimum wage really appreciated you complaining about something they have zero say in.
Score: 3 Votes (Like | Disagree)

Michael73
"Help us get the complete picture"

BeachChair
I cant believe we arent getting an update on this from Arn. Did the Apple press just lure thousands into getting their Apple ID's phished?
Score: 2 Votes (Like | Disagree)

I'd love to get one of these invites.

I am always submitting bugs to bugreporter @ apple. But I have given a lot of feedback in the past 1-2 years. But, I have never seen that page before. lol

So I guess my complaint is all void. :D
Score: 2 Votes (Like | Disagree)

PsykX
I am so not convinced that this is a legit Apple website :

- Website is in ASP (Microsoft technology), when Apple.com is not
- Website has the old Apple.com light gray bar at top
- They dont have my ID from Apple.com
- You can already report feedback on every product @ apple.com/feedback
- Ive been redirected to an external website that had an error with IIS and displayed a "cannot display page" similar to the one in Internet Explorer 4, 5 and 6

Hum I know I still cannot prove it with those arguments, but all in all, this isnt an Apple website for me until I see proofs.

Edit : However, it does say that its Apple that registered it in the WHOIS information.
Score: 2 Votes (Like | Disagree)
Read All Comments