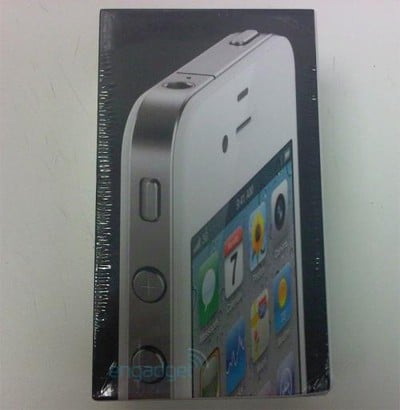 Engadget reports that it has received photos from a reader who claims to have purchased a white iPhone 4 through Vodafone in the UK today. The carrier has reportedly been gearing up to receive shipments of the device, but it now appears that the units may in fact be arriving and have slipped out for sale in a few instances.

Now, we've secured a few images of a 16GB model from a separate source that has seemingly made its way into the hands of one lucky customer (read: bloke) over in Britain.

As the story goes, the carrier's point-of-sale system rang it up as a black iPhone, and shortly after the sale went down, Voda sent out a notice to halt sale of these gems "until next week."

Interestingly, the iPhone appears to show a modified proximity sensor, utilizing an open slot over the earpiece instead of the previously-seen fine grating.

The most recent rumors have pegged the white iPhone 4 launch for next Wednesday, April 27th.

Adidas Addict
I hear it's a UK exclusive as a thanks for paying too much apple tax for the last 15 years.

Bet you'd say it was the best thing since slice bread if it had a Samsung badge on it.


I wouldn't expect anything less from someone who's 'About Me' page looks like this:

How come you brits always complain about the apple tax when you made a conscious decision to purchase this device that you want, but never complain you have to pay for the royal retards you have running around?


Lighten up, jeeez uptight much?
Score: 10 Votes (Like | Disagree)

Tsurisuto
Finally the UK gets something first!
Score: 9 Votes (Like | Disagree)

Al Coholic
White is a bad idea. Just think if you drop it in the snow! Oh, the horror. :eek:

Waiting for the iP5 in Orange.
Score: 7 Votes (Like | Disagree)
Read All Comments

Monday July 26, 2021 4:53 pm PDT by Juli Clover
During a Tesla earnings call that took place today, Tesla CEO Elon Musk spent time sniping at Apple, reports CNBC. Musk criticized Apple's "walled garden" and made comments on the company's cobalt use. In a discussion about plans to allow Tesla competitors to use the Tesla electric vehicle charger network, Musk said that Tesla does not want to create a walled garden to "bludgeon" Tesla...
Read Full Article • 352 comments