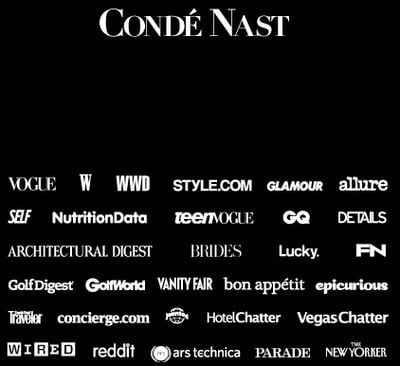 Ad Age reports that Conde Nast, one of the early iPad supporters in the magazine industry, is slowing down its plans to bring more titles to the platform, citing slow sales of its existing titles.

"It's a shift," one Conde publisher said. "The official stance was we're going to get all our magazines on the iPad because this is going to be such an important stream. The new change is maybe we can slow it down. In my opinion it makes Conde look smart because we have the ambition, but we're not rushing."

"They're not all doing all that well, so why rush to get them all on there?" the publisher added.

According to the report, development of iPad applications is now up to the individual publishers for each magazine, shifting away from a concerted effort by the conglomerate to push forward on all titles.

Conde Nast is said to be increasing its focus on sales of existing titles and generating unique iPad applications that don't mimic the print editions and instead offer "exclusive" content. Ad buyers are also reportedly still looking to see the distribution scale and metrics that will drive that market forward to sustain the digital magazine model, a position that is no doubt influencing Conde Nast's strategy to focus on scaling existing titles.

fmaxwell
I don't want an app for every magazine I read!

Conde Nast is having to "slow down" because they've created a damned expensive delivery system instead of using a preexisting thing like Zinio, iBooks, B&N Reader, Kindle, etc. Imagine if every ebook series had its own app!
Score: 4 Votes (Like | Disagree)

seamer
The prices for e-equivalents of established magazines is just unfeasible. Even with Apple taking 30% of the cut, it would still be profitable to just lower the sale price. E-sales mean less resources (ie paper, ink), lower transport costs, and less % to the store who sold the physical magazine. Keeping the magazines at print prices is pure gouging, and the slow sales reflect that.
Score: 4 Votes (Like | Disagree)

bmat
I'd get the New Yorker in a minute if it was even remotely priced the way it would be for a print subscription. I'd pay even more--due to the convenience factor, but not $5 an issue.

The demand is not there because their prices are unrealistic.
Score: 4 Votes (Like | Disagree)

I don't want a 'magic' magazine, I just want the magazine on my iPad and so I'm happy with Zinio. They want to sell zillions of copies they need to get their subscription rate down to the level of the mail subscriptions and make it easy to get them. Cute movies, animations and the like? Put a link to the web.

Magazine publishers: If you wasting any more resources than just making it an intelligent PDF file you are wasting your time and forcing the price up to the point no one wants your product. Learn from Steve - when doing something new make it build on what came before - people aren't going to get something new and unfamiliar in style or price, especially a much higher price.
Score: 3 Votes (Like | Disagree)

I'm not a thrifty person by nature, so it says plenty that I refuse to pay the prices they're asking for these mags on the iPad. It really is that simple. Make them $1.99 and sales will go through the roof.
Score: 3 Votes (Like | Disagree)