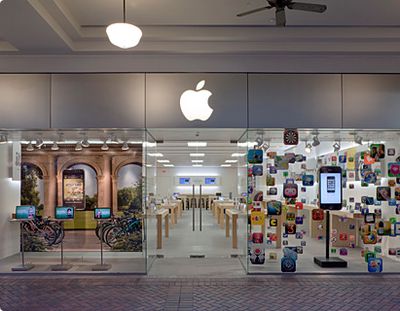 AppleInsider reports that Apple retail employees are restricted from taking time off between May 20 and May 22nd.

Retail employees were told this week via e-mail that they may not request days off between May 20 and May 22, AppleInsider has learned. It was said that store managers are "very excited" about those dates, but no other details are available.

They go on to speculate that Apple may be using those days for a 10th anniversary event celebrating their retail stores. While Apple is also due to refresh the iMac computer, those simple product refreshes don't routinely result in any special retail events. The last time Apple reportedly enforced such blackout dates was due to the Verizon iPhone 4 and iPad 2 launches.

Apple opened their first retail stores on May 19, 2001 in Tysons Corner, Virginia and Glendale, California. Apple's retail store initiative was met with significant doubts from analysts at the time. A Businessweek article from 2001 titled "Sorry, Steve: Here's Why Apple Stores Won't Work" confidently predicted the doom of the stores.

Problem is, the numbers don't add up. Given the decision to set up shop in high-rent districts in Manhattan, Boston, Chicago, and Jobs's hometown of Palo Alto, Calif., the leases for Apple's stores could cost $1.2 million a year each, says David A. Goldstein, president of researcher Channel Marketing Corp. Since PC retailing gross margins are normally 10% or less, Apple would have to sell $12 million a year per store to pay for the space. Gateway does about $8 million annually at each of its Country Stores. Then there's the cost of construction, hiring experienced staff. "I give them two years before they're turning out the lights on a very painful and expensive mistake," says Goldstein.

Apple, of course, has gone on to open over 300 stores worldwide to great success.

Update: We've received a report that this may be due to some internal training rather than any sort of event.

qtx43
Steve Jobs: Hey, I read on the internet that our retail stores' 10th anniversary is coming up.

Tim Cook: Really? We ought to do something.

Tim Cook: Good thing they reminded us. How about everybody spending $100 at a store on May 19th gets a free 0.99$ iTunes credit. That'll be fun.

Its always funny to read analyst predictions that are so wrong.


Was thinking the same thing. This one was especially amusing. :D
Score: 1 Votes (Like | Disagree)

La Porta
I've got to say, the comparison with Gateway is pretty funny....where are they now?
Score: 1 Votes (Like | Disagree)

That Business week article was amusing to read. In fairness though, predictions should always be taken with a grain of salt (unless they come from me of course) and that was before Apple starting really turning itself around. It is interesting to note though how many times the analysts have predicted doom and gloom for Apple's products and how rarely have they been right. Though halo effects from its other products helped more, the Apple retail stores certainly helped rather than hurt that turnaround happen. Anyway reading prognostications from the past is always nice for a chuckle almost regardless of subject matter. :p
Score: 1 Votes (Like | Disagree)

talkingfuture
Its always funny to read analyst predictions that are so wrong.
Score: 1 Votes (Like | Disagree)
Read All Comments