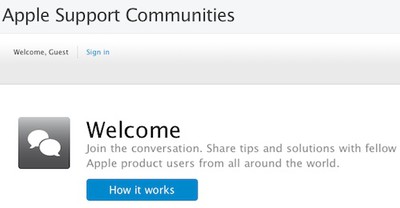 Over the weekend, Apple finally rolled out the planned revamp of its support discussions forums, rebranding them as Apple Support Communities. The company had announced last August that the changes would be happening "very soon".

Apple has posted a series of tutorials laying out how Apple Support Communities bring a new organization and layout to the company's discussion forums, offering individual sections for each product line and a prominent text box for searching existing discussions by typing in a question.

Social-based features allow users to promote replies to questions by offering their own responses or "liking" individual posts. Community members can flag previously-posted answers as "correct", increasing the reputation score of helpful members to give additional weight to their future comments and provide them with increased privileges within the forums.

As noted by Fortune, however, the revamp is not being met with universal acclaim, with a number of users complaining about the changes and other bugs. While it will obviously take a bit of time for users to become familiar with the operation of the new site, it remains to be seen whether Apple will incorporate some of the feedback to improve the new Apple Support Communities experience.

blondepianist
The default username is [name]from[town]?? Seriously? The whole point of the username is to anonymize my profile. And unfortunately, I clicked "Agree" to the ToS before noticing that the same screen also confirms your name. Now I'm stuck with it :mad:
Score: 2 Votes (Like | Disagree)

50548
I've already posted some answers there and like the new design overall...only request for now would be for threads to show the number of replies - otherwise we have no clue as to whether a question has been answered or not.
Score: 1 Votes (Like | Disagree)
Read All Comments