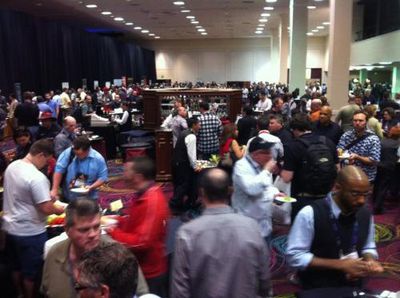 Pre-event photo by @fcpsupermeet
The Final Cut Pro User Group Supermeet is about to kick off, and everyone seems to expect that Apple will be presenting the new version of Final Cut Pro. The event kicks off at 10pm Eastern, 7pm Pacific and has been rumored to include Apple as the main stage presenter. There has been no official confirmation of this, so hopefully everyone won't be disappointed. We'll provide updates here as we get them.

new interface via @robimbs
- Dynamically handle massive quantities of media, resolution independent playback. full color managed based on ColorSync. Grand Central Dispatch, using all cores and background rendering (via @reximilian, and @robimbs)
- Allows you to edit as you are importing, you don't have to wait to ingest. (via robimbs)
- Background rendering is built in. No more "writing video" dialog box (via @dbax)
- Content auto analysis, meaning it can auto detect most media and when it imports can auto image stabilize. On import it can: People Detection, Shot Detection, Auto Color Balance, Audio Cleanup (via @rexmilian)
- Automatic audio clean up on the way. Options to rid hum, rumble, etc. on the way in. Range-based keywording. You can select ranges inside your clip and apply keywords to those ranges instead of just keywording the clip. No subclipping necessary. Smart collections: Categorizes things like media types (audio, stills), how many people are in shots and how those shots are framed. Smart collections looks very iMovie-ish. (via PhotographyBay)
- Clip Connections: Audio and Video and be locked together and be one clip on a timeline (no longer a V1 and A1 A2 track). Can lock audio clips with specific video clip, so if moved on timeline they stay synched (via @reximilian)
- "Compound Clips": collapse chunks of media into a single clip on the timeline. How nesting always should have worked. (via @fcpsupermeet)

Inline precision editor via @robimbs
- Inline Precision Editor: click on an edit and it shows unused footage on both clips of the edit to help you trim (@rexmilian)
- the Auto Analyze will make Search Folders that know what has people in it, or CloseUps or Wide Shots.
- Tagging clips let's you tag only specific parts of the clip to tage with keyword or favorite
- Timeline Index: list of every clip on your timeline in order and let's you search by name or tag (via @reximilian)
- Automatically analysis audio and can sync audio with similar audio. Simple audio keyframing, tweaking the audio is much easier. Trimming clips, the Magnetic Timeline makes complicated edits easier.
- Instant render in the background all the time, does not at all effect editing. (@robimbs)
- Built in color matching. Match clip colors from two different cams very fast. That got BIG applause. (@comebackshane)
-

Also known as the guy who made FCP and Premiere originally.

Also the guy who took a nice iMovie and made it unusable. I hope he doesn't fsck up FCP. Even iMovie had background rendering until he stripped it out.
Score: 1 Votes (Like | Disagree)

ipedro
Who thinks that they'll eliminate Final Cut Express and lower the price of Final Cut Pro? iMovie seems to serve the "express crowd" while FCP would be within reach of the semi-pro demographic if the price were around $300.
Score: 1 Votes (Like | Disagree)

CIA
Supposedly the guy behind this new version is also the criminal that destroyed iMovie a few years back. God I hope FC8 isn't ANYTHING like iMovie. Old editors are too set in our ways to switch over to a iMovie/Sony Vegas style of editing. I need a preview window, and a Timeline Window. Just like when I edited on tape.