ThunderBolt Products Starting to Roll Out at NAB 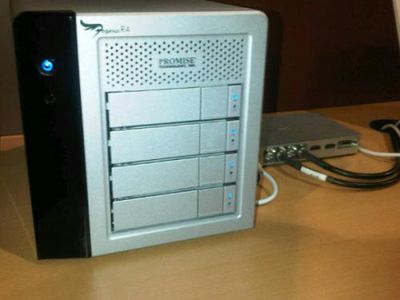 Pegasus R4 RAID w/ Thunderbolt, photo by @josh_diamond
The 2011 National Association of Broadcasters (NAB) trade show is underway. While the event is primarily targeted at Audio/Video/Film professionals, Apple fans will be interested to see that companies are finally starting introduce Thunderbolt-compatible devices into the market. Jigsaw Broadcast posts a brief summary of the some of Thunderbolt solutions introduced so far. They include products from AJA, Blackmagic, Promise, and Matrox. All are targeted at video professionals, but finally shows some industry adoption of the new connectivity standard.

Apple and Intel launched Thunderbolt alongside the new MacBook Pro revisions in February. Thunderbolt promises faster connectivity than USB 3.0 and FireWire and we expect it to be included in all future Mac products.

Promise was one of the first companies that announced support for RAID Thunderbolt drive enclosures back in February. Those enclosures aren't yet shipping, but at least a couple of early prototypes are being demoed on the NAB floor. @sforde reports on one at the Adobe booth:

Wow! We have 1 of only 2 promise raids in world with thunderbolt at the Adobe booth at #NAB. CS5.5 screams on it.

The other must be at the Blackmagic booth which is pictured above. Meanwhile, the big anticipated news from NAB is Apple's announcement of a new version of Final Cut Pro. That news should arrive tomorrow night if rumors prove true.

TBolt devices haven't even hit the market, but TBolt is already too slow for many uses.

TBolt devices haven't even hit the market, but TBolt is already too slow for many uses.
Score: 1 Votes (Like | Disagree)
Read All Comments

Sunday February 5, 2023 6:07 am PST by Joe Rossignol
Apple has discussed selling a new top-of-the-line iPhone alongside the Pro and Pro Max models in 2024 at the earliest, according to Bloomberg's Mark Gurman. Based on this timeframe, the device would be part of the iPhone 16 lineup or later. In a September 2022 edition of his weekly "Power On" newsletter, Gurman said there was "potential" for an iPhone 15 Ultra to replace the iPhone 15 Pro...
Read Full Article • 335 comments

Saturday February 4, 2023 1:30 am PST by Hartley Charlton
Google's Chromium developers are working on an experimental web browser for iOS that would break Apple's browser engine restrictions, The Register reports. The experimental browser, which is being actively pursued by developers, uses Google's Blink engine. Yet if Google attempted to release it on the App Store, it would not pass Apple's App Review process. Apple's App Store rules dictate...
Read Full Article • 246 comments