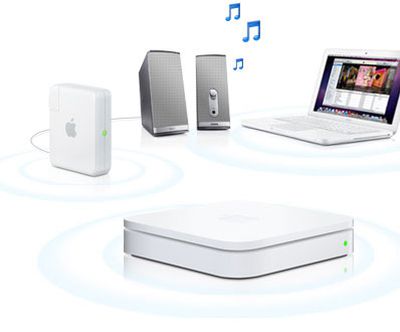 This program emulates an Airport Express for the purpose of streaming music from iTunes and compatible iPods. It implements a server for the Apple RAOP protocol.

Previously, the private key was unknown, which meant that only Apple's Airport Express or official 3rd party solutions could wirelessly stream music from iTunes or equivalent. Many existing solutions such as Rogue Amoeba's Airfoil have long been able to stream music to AirPort Express or other AirPlay devices, but not the other way around. A Hacker News commenter illumin8 spells it out:

Now you can do this:
iTunes -- stream to --> 3rd party software/hardware

Now, it seems unlikely that any hardware manufacturers will use the unauthorized information to create AirPlay-compatible hardware products, especially when it is possible to be an officially licensed AirPlay partner. However, this does open the door to software solutions. iTunes music , for example, could be streamed to other Macs, non-Macs, customized consoles (Xbox 360), or mobile devices with the right software. The developer originally posted the key to the VideoLan developer mailing list in case there was interest in adding that feature to a future version of VLC.

Thursday September 29, 2022 1:08 pm PDT by Juli Clover
The third beta of iOS 16.1 that was released earlier this week expands the Adaptive Transparency feature introduced with the second-generation AirPods Pro to the original AirPods Pro. As noted on Reddit, first-generation AirPods Pro owners who also have the AirPods beta software will now see an "Adaptive Transparency" toggle in the AirPods section of the Settings app. The 5A304A beta...
Read Full Article • 110 comments