The U.S. Patent and Trademark Office yesterday published a remarkable volume of new Apple patent applications, offering another look at technologies the company has at least been thinking about, even if they may never see the light of day. Here are a couple of the interesting ones that made their appearances yesterday.

One patent application detailed by Patently Apple describes a concept for bringing a "Spaces" style workspace switcher to the iPad. While the interface is extremely similar to that found in Mac OS X and in fact uses Mac OS X running on a tablet-style device in image exhibits within the application, it does reveal that the company has considered how such a system could be implemented on a multi-touch device. 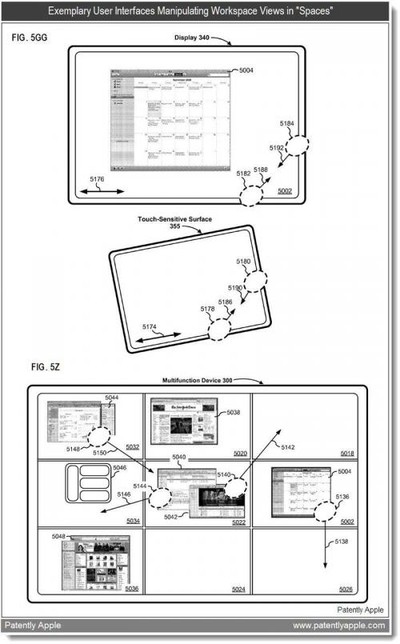 According to descriptions within the patent application, Apple envisioned invoking Spaces on an iPad-like device with either a two-finger pinching gesture in a specific location or by using a five-finger tapping or pinching gesture. Various interactions be used to either switch directly between workspaces or to display a graphical representation of all workspaces for selection or to drag windows between workspaces.

As noted by AppleInsider, a second patent application discusses the potential for including multiple cameras on the iPhone to enable users to take three-dimensional photos. In particular, Apple discusses hardware methods of employing three sensors to pick up different information about a scene, including individual sensors for luminance (brightness) and chrominance (color) with a third sensor to provide alignment information for constructing a three-dimensional image rather than relying on software extrapolation for such purposes. Apple argues that the system would produce higher-quality images and reduce processor load for creation of three-dimensional images.