iFixit yesterday announced that it has completed teardowns of the GSM and CDMA versions of the iPad 2, joining the teardown of the Wi-Fi version performed on launch day earlier this month. Rather than posting an extensive walkthrough of each model, iFixit focused on the few areas in which the various models differ from one another, related of course to the cellular connectivity needs or lack thereof.

The most obvious physical difference between the 3G models is the micro-SIM card slot along the upper left edge of the GSM model, required for providing the device with subscriber information. The micro-SIM card slot itself is actually attached to the headphone jack cable on the GSM model, while the CDMA model lacks the slot entirely as subscriber information is instead hosted directly on the WWAN board inside the device. 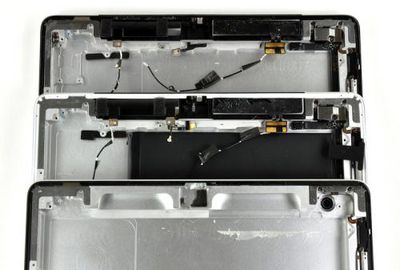 iPad 2 antenna configurations: GSM (top), CDMA (middle), and Wi-Fi (bottom)
Given the differences in frequencies used for the GSM and CDMA network standards, it is also unsurprising that the two 3G iPads offer slightly different antenna configurations, with the CDMA version offering one more antenna than the GSM version, similar to the iPhone 4.