Repair firm iFixyouri has started taking apart the Verizon iPhone and 9 to 5 Mac notes that the device carries a Qualcomm "Gobi" MDM6600 wireless chip inside it, technically offering "world-mode" compatibility with both CDMA and GSM networks. iFixit is also performing one of its usual high-quality teardowns of the Verizon iPhone and has seen the same chip. 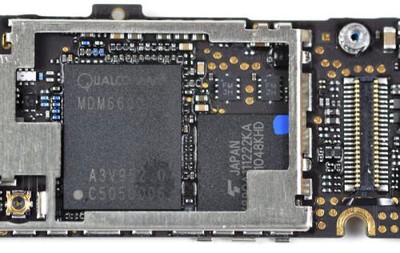 The MDM6600 supports HSPA+ data rates of up to 14.4 Mbps, as well as CDMA2000 1xEV-DO Rev. A/Rev. B. Apple of course has not included a SIM-card slot in the Verizon iPhone, and thus the device can not actually be used on GSM networks.

The use of the dual-mode chip in the Verizon iPhone does, however, increase the likelihood that Apple will use a similar solution in the fifth-generation iPhone and could thus offer a single model supporting both GSM and CDMA networks.

Update: iFixit's Kyle Wiens speculates that keeping separate CDMA and GSM devices for the time being may have made it easier for Apple when it comes to antenna design given the number of frequencies involved across the standards. The Motorola Droid Pro currently uses the same Qualcomm chip to offer both CDMA and GSM compatibility.

Sunday May 31, 2020 8:04 pm PDT by MacRumors Staff
Amid unrest in numerous U.S. cities following last week's killing of George Floyd by police in Minneapolis, Apple CEO Tim Cook has shared an internal memo with employees (via Bloomberg) addressing the pain that many are feeling and urging others to commit "to creating a better, more just world for everyone." Cook also announced that Apple is making donations to several groups challenging...
Read Full Article • 115 comments

Thursday June 4, 2020 10:07 am PDT by Juli Clover
We still have a few months to go before Apple unveils the iPhone 12, but rumors about the iPhone 13, coming in fall 2021, are already circulating. Japanese site Mac Otakara today shared a rough 3D printed mockup of a 5.5-inch iPhone said to be coming in 2021, which is from "Alibaba sources." The model may be built on leaked specifications and rumors, but where the info comes from is unclear. ...
Read Full Article • 87 comments