Buying an iPad 2 on Launch Day 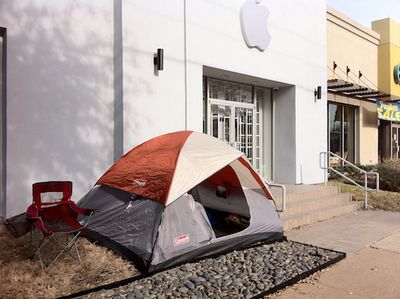 Apple announced this morning that they would begin taking online orders for the iPad 2 at 1:00 AM Pacific Time / 4:00 AM Eastern Time. Unfortunately, it looks like there will not be an option to reserve an iPad 2 for in store pickup, which means you'll have to wait for the iPad 2 to be delivered. So, if you are hoping to pick one up on launch day, online ordering won't help.

With every major product launch, Apple retail stores tend to get the best supplied but also the most crowded. If you want to get an iPad 2 on launch day, and don't mind standing in line, an Apple Retail store is your best bet.

Local Apple Retail stores can be found online. The iPad 2 will go on sale starting at 5 PM local time and Apple is offering free personal setup to customers.

BestBuy has posted a FAQ about their iPad 2 sales. BestBuy will not be offering online sales at launch. They will implement a "ticket system" at their retail stores. Tickets will be handed out at 4:30 PM local time on March 11th. These tickets will be used to get an iPad 2. Presumably they will be giving out only as many tickets as they have iPad 2s, so you won't needlessly wait in line if stock runs out.

BestBuy also says that only BestBuy Stores with "Apple Areas" are going to be carrying the 3G models, so that is something to consider if you are interested in the 3G model. Several readers have also noted that their BestBuy's are limiting customers to one iPad 2 per customer. We've heard mixed reports but many Best Buy stores seem to be getting ~100 different models of the iPad 2 in stock for launch day.

Both Wal-Mart and Target tend to be a bit less organized with major product launches. Reader reports indicate that some of the stores don't even know if they are getting stock for launch, while others report only a handful of units. This could serve to your advantage depending on the store. One reader reports that they saw an iPad 2 on the shelves today, but weren't able to buy it:

I was surprised to find the new models on the same shelf. Black only (at my rural walmart.) I didn't check to see all the models available, but they definitely had the 16 and 32g in both Wifi and 3G varieties. They may have had more. They only had a few out. Sorry, I didn't count them.

I asked to buy one. The nice lady behind the electronics counter opened the case, pulled the 16gWifi out for me, and began to ring me up. I was really excited. BUT, the system notified her that she couldn't sell them yet. She (mis)informed me that if I came back after midnight tonight I could get one. We'll see.

Photo of iPad 2 at Walmart via RazorianFly

In line with Apple's plans, AT&T will begin taking online orders at 1:00 AM Pacific Time, with in-store availability set for 5:00 PM local time. Verizon appears to only be offering in-store sales at "select" retail stores beginning at 5:00 PM local time.

Contrary to early speculation, there's no activation fee for the Verizon data plans. One reader has posted the Verizon sales manual for the iPad 2.

Readers are organizing and sharing information about various locations in our iPad forums and launch meetup forum.

Thursday September 29, 2022 12:38 pm PDT by Juli Clover
Tony Blevins, Apple's vice president of procurement, is set to depart the company after he made a crude comment about his profession in a recent TikTok video, reports Bloomberg. Blevins was in a video by TikTok creator Daniel Mac, who was doing a series on the jobs of people he spotted with expensive cars. After seeing Blevins in an expensive Mercedes-Benz SLR McLaren, Mac asked Blevins what ...
Read Full Article • 298 comments