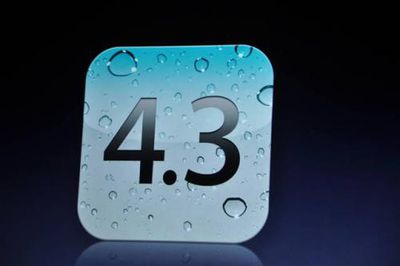 Apple announced today during their iPad 2 keynote, that iOS 4.3 will be arriving on March 11th with a number of new features. iOS 4.3 includes a faster Safari browser, iTunes Home Sharing, AirPLay enhancements, iPad side switch preference (rotate or mute), and the Personal Hotspot feature for iPhone 4.

"With more than 160 million iOS devices worldwide, including over 100 million iPhones, the growth of the iOS platform has been unprecedented," said Steve Jobs, Apple's CEO. "iOS 4.3 adds even more features to the world's most advanced mobile operating system, across three blockbuster devices--iPad, iPhone and iPod touch--providing an ecosystem that offers customers an incredibly rich experience and developers unlimited opportunities."

The new features are detailed here:

- Faster Safari - The Nitro JavaScript engine that Apple pioneered on the desktop is now built into WebKit, the technology at the heart of Safari, and more than doubles the performance of JavaScript execution using just-in-time compilation.
- iTunes Home Sharing - allows iOS 4.3 users to play music, movies and TV shows on an iPad, iPhone or iPod touch from their iTunes library on a Mac or PC over a local Wi-Fi network.
- Enhancements to AirPlay - With iOS 4.3 you can stream additional content including video from third party apps and web sites, videos from the Photos app and previews from the iTunes app to your TV
- Personal Hotspot - This feature in iOS 4.3 lets you bring Wi-Fi with you anywhere you go, by allowing you to share an iPhone 4 cellular data connection with up to five devices in a combination of up to three Wi-Fi, three Bluetooth and one USB device.

iOS 4.3 is compatible with iPhone 3GS, iPhone 4 GSM, 3rd Gen iPod Touch, 4th Gen iPod Touch, iPad, and iPad 2. It will be available for download starting on March 11th. The iPhone 4 CDMA (Verizon) seems to be excluded from the compatibility list.