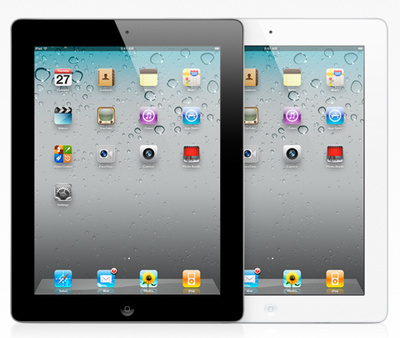 As expected, Apple announced the next generation of its popular tablet device at a media event today. The iPad 2 will have the same 9.7-inch display but will be 33% thinner than the previous model. It will have front-facing and rear-facing cameras and Apple's new 1GHz dual-core A5 processor.

With more than 15 million iPads sold, iPad has defined an entirely new category of mobile devices, said Steve Jobs, Apples CEO. While others have been scrambling to copy the first generation iPad, were launching iPad 2, which moves the bar far ahead of the competition and will likely cause them to go back to the drawing boards yet again.

With the addition of cameras, the next-generation iPad will be capable of making FaceTime calls with other FaceTime-capable devices. The rear-facing camera can capture 720p HD video. Despite its thinner casing, the iPad 2 will have the same battery life as the first generation of 10 hours and 30 days of stand-by time.

Apple has designed new accessories for the next-generation iPad, including cases called Smart Covers and an HDMI adapter. The Smart Covers will attach magnetically to the iPad 2 and will automatically wake the device when opened and put it to sleep when closed.

The iPad 2 will run iOS 4.3 which will be released for other iOS devices on March 11.

imwoblin
I'm in, only question is white or black??!!
Score: 1 Votes (Like | Disagree)

Islandz
Everyone seems to have missed the biggie.

Apple just challenged consoles HARD and no one has noticed yet.

My iPhone controller will be able to control apps on my iPad, my Mac, or my Apple TV.

How did you miss this? This is HUGE.
Score: 1 Votes (Like | Disagree)
Read All Comments