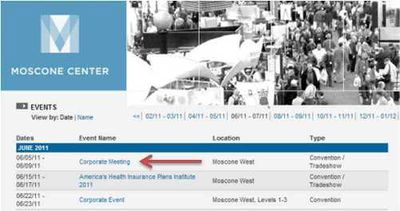 Originally spotted by AppleBitch.com, the possible dates for WWDC this year appear to fall between June 5th and 9th. The Moscone events page shows a "Corporate Meeting" in Moscone West occupying those dates. In the past, such listings have predicted Apple's WWDC event, but not with complete accuracy. Last year, Apple's actual WWDC dates did not fall on the predicted dates.

What is interesting is that the dates do correspond with tentative leaked dates from a San Francisco Convention and Visitors Bureau PDF. Those dates included:

With the rise of iOS and Apple's withdrawal from Macworld Expo, WWDC has become a major event for Apple each year. This year, Apple is expected to feature Mac OS X Lion prominently.