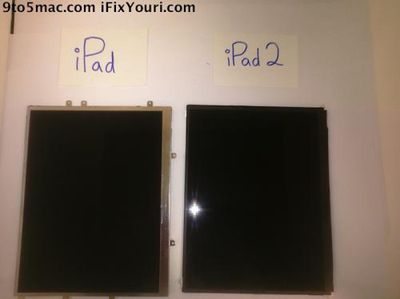 iFixYouri and 9to5Mac have posted photos of what is said to be the new iPad 2 screen.

At this point, we cannot tell if the resolution is higher (or "Retina") but it is definitely higher quality in terms of its build. The iPad 2's display is also lighter, and over a mm thinner than the current iPad's display with a smaller surrounding frame.

No other details (such as resolution) have been revealed, but the slightly thinner screen agrees with previous analyst reports that claim that the iPad 2's screen will be 30-35% thinner as well as offering an anti-reflective coating for better outdoor usage.

Apple is widely expected to release a new iPad in the first quarter of this year.

Update: One commenter at 9 to 5 Mac has deciphered the new screen's model number of LP097X02-SLN1 as indicating a 9.7-inch H-IPS display from LG with the same 1024 x 768 resolution as the current iPad.

Thursday September 29, 2022 12:38 pm PDT by Juli Clover
Tony Blevins, Apple's vice president of procurement, is set to depart the company after he made a crude comment about his profession in a recent TikTok video, reports Bloomberg. Blevins was in a video by TikTok creator Daniel Mac, who was doing a series on the jobs of people he spotted with expensive cars. After seeing Blevins in an expensive Mercedes-Benz SLR McLaren, Mac asked Blevins what ...
Read Full Article • 525 comments