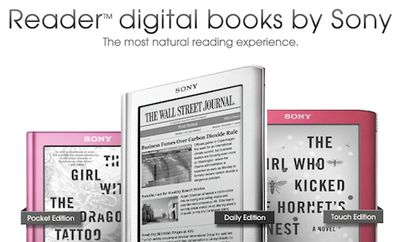 The New York Times reports that Apple has begun rejecting App Store submissions for applications that offer users the ability to purchase content from outside the company's in-app purchasing mechanism. One of the major applications reportedly rejected under this policy change is Sony's Reader application that would have allowed iOS device users to view eBook content downloaded from its Reader Store.

The company has told some applications developers, including Sony, that they can no longer sell content, like e-books, within their apps, or let customers have access to purchases they have made outside the App Store.

Apple rejected Sony's iPhone application, which would have let people buy and read e-books bought from the Sony Reader Store.

Apple told Sony that from now on, all in-app purchases would have to go through Apple, said Steve Haber, president of Sony's digital reading division.

The move calls into question the fate of such popular eBook applications such as Kindle and Barnes & Noble NOOK for iOS devices. Those applications have so far skirted Apple's rules regarding in-app purchasing by directing users to Safari for purchasing content through a web-based interface, then using the native iOS applications for browsing and viewing the purchased content. But Apple's recent change of heart appears to now ban even that approach.

The change may signal a shift for Apple. The company has made more money selling hardware than music, e-books or apps. If people could have access to more content from more sources on their iPhones and iPads, the thinking went, then they would buy more devices.

Content providers will be hard pressed to alter their business models to comply with Apple's demands, as they would need to offer their content through in-app purchasing mechanisms from which Apple takes a 30% cut of sales. That slice of revenue would mean that content providers would have to either accept significantly less revenue while selling at the same prices they currently do, or substantially raising prices to compensate for Apple's cut of sales.

Apple has been rumored to be building into iOS support for recurring subscription billing via users' iTunes Store accounts. The feature is expected to play a key role in deployment of News Corp.'s tablet-focused news publication, The Daily, set for introduction later this week.

Deployment of such a feature, as well as others potentially enhancing content delivery to iOS devices, could put Apple in a position where it feels that it offers sufficient options for publishers to get their content onto iOS devices while Apple controls the delivery mechanisms. Those options are apparently giving Apple the ability to flex its muscles to shut down non-Apple methods of distributing content to iOS devices, thus ensuring that Apple controls and receives revenue from all sales.