Next Week's Planned Launch of 'The Daily' Pushed Back

All Things Digital reports that the Steve Jobs-Rupert Murdoch media event rumored to have been scheduled for next Wednesday to introduce News Corp.'s new iPad-focused news publication The Daily has been pushed back. The change apparently comes as Apple seeks more time to finish working on its end of the project, which involves support for recurring billing subscriptions through users' iTunes Store accounts and the ability to automatically "push" new content on a daily basis to those with subscriptions.

Apple and News Corp. have made a joint decision to push back next week's planned launch, according to sources familiar with the companies' plans. The delay is supposed to give Apple time to tweak its new subscription service for publications sold through its iTunes platform.

Plans to debut the iPad newspaper at the San Francisco Museum of Modern Art next Wednesday have been tabled "for weeks, not months," Im told.

The reported internal delay comes as the first hints of what the publication may look like have appeared, with Poynter's Damon Kiesow discovering a small image buried in The Daily's website showing a pair of cover screenshots.

But peeking inside the source code of its recently-launched companion website, TheDaily.com, I came across the image below, which appears to be a house ad for the new app.

The Daily staff has reportedly been producing sample editions of the tablet app for several weeks, so the covers shown here may represent that work. 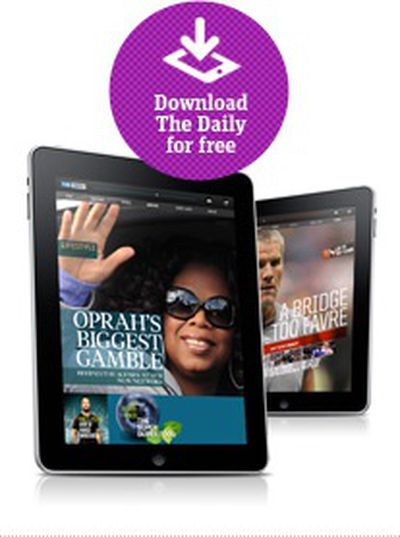 While it is not entirely clear how content on The Daily's website will compare to that found in the app, Kiesow also discovered other hints of certain functionalities for the website, including support for social media sharing and an embedded video player. The tablet application, which is rumored see subscription prices of 99 cents per week, has been said to be offering substantial video and multimedia content.
[ 36 comments ]

Wednesday November 30, 2022 12:43 pm PST by Juli Clover
Twitter CEO Elon Musk today met with Apple CEO Tim Cook at the Apple Park campus in Cupertino, California, according to a tweet shared by Musk this afternoon. Musk thanked Cook for taking him around Apple's headquarters, with no mention of what the two might have discussed. The meeting comes just after Musk on Monday claimed that Apple has "mostly stopped" offering ads on Twitter, and that...
Read Full Article • 358 comments