The flood of news stories coming out ahead of the Verizon press conference continues to reinforce the likelihood that the Verizon iPhone will be announced on Tuesday, with The Wall Street Journal now reporting that Verizon is confident that it will be able to handle the onslaught of the iPhone.

Verizon Wireless, the country's largest wireless carrier, is confident enough in its network that it will offer unlimited data-use plans when it starts selling the iPhone around the end of this month, a person familiar with the matter said. Such plans would provide a key means of distinguishing its service from rival AT&T Inc., which limits how much Internet data such as videos and photos its customers may use each month.

AT&T has been widely criticized for performance issues related to its handling of the iPhone. In several major cities, users have reported frequent dropped calls and poor reception.

For its part, AT&T has begun going on the offensive, already working to tout the speed of its 3G network compared to Verizon's CDMA network and also apparently moving to aggressively court the low end of the market with some pricing changes.

The iPhone is built for speed, but that's not what you get with a CDMA phone. I'm not sure iPhone users are ready for life in the slow lane."

Meanwhile, just prior to the news breaking last Thursday regarding a Verizon iPhone introduction tomorrow, AT&T lowered the price of the 8 GB iPhone 3GS from $99 to $49 with a new two-year contract. Apple quickly followed suit in its own online store, lowering iPhone 3GS pricing to $49 in line with AT&T's pricing. 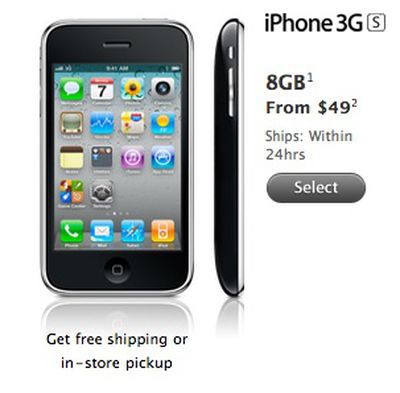 All of the focus of the Verizon rumors has been on a CDMA-capable version of the iPhone 4, and Apple is not expected to introduce a CDMA-capable version of the low-end iPhone 3GS for the carrier, meaning that customers not looking for the latest hardware should in fact find the entry-level iPhone price point $150 cheaper at AT&T than Verizon, assuming Verizon offers the same $199/$299 pricing on iPhone 4 models as offered by AT&T.

Apple's pricing for the iPhone 3GS does not appear to have changed in any other countries, where the company's online stores sell iPhones only at unsubsidized prices, suggesting that the U.S.-only move is likely an action by AT&T to boost its subsidy for the iPhone 3GS and thus more aggressively target the low end of the market unreachable by Verizon and its iPhone 4.