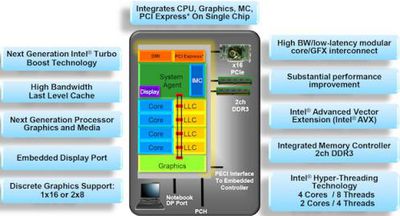 Today, Intel announced their next generation processor architecture known as "Sandy Bridge" (or 2nd Generation Core processor). The new processors are built on the 32nm process and integrate the processor, memory controller and graphics on the same die. In particular the new integrated graphics performance is significantly improved over previous Intel's previous chips.

Sandy Bridge is, essentially, a next-generation replacement for Intel's primary CPUs for desktops and laptops .... At the heart of Sandy Bridge is an essentially new processor microarchitecture, the most sweeping architectural transition from Intel since the introduction of the star-crossed Pentium 4. Nearly everything has changed, from the branch predictors through the out-of-order execution engine and into the memory subsystem. The goal: to achieve higher performance and power efficiency, even on single-threaded tasks, where the integration of multiple CPU cores hasn't been much help.

Anandtech in particular notes that the new processor architecture is a major step forward for laptops, significantly closing the price/performance gap between desktops and laptops.

Also promising for Mac users is that they found the graphics performance generally exceeded that found in the NVIDIA 320M that is presently used in the MacBook and MacBook Airs in Low detail settings:

Again, Sandy Bridge delivers playable performance in every single title at 768p and "Low" detail settings. What's more, it actually surpasses the GeForce 320M in Apple's MacBook Pro 13 in five out of six games (the exception being STALKER).

Performance, however, did lag in Medium detail settings. Intel's previously poor integrated graphics performance was seen as one of the reasons why Apple has stuck with pairing of previous generation Intel processors and NVIDIA 320M GPUs.

Overall, Anandtech is impressed with the performance and battery life of the new chips:

Not only do we get 50 to 100% better performance than the previous generation high-end Intel mobile chips, but we also get more than double the integrated graphics performance and battery life in most situations should be similar to Arrandale, if not better. And that's looking at the quad-core offerings!

Meanwhile, dual core and low-power versions of Sandy Bridge processors are expected to arrive next month.

Monday December 5, 2022 11:44 am PST by Juli Clover
Due to production issues at Apple supplier factories in China, the iPhone 14 Pro and iPhone 14 Pro Max are backordered and basically out of stock at every store. If you were planning to gift or receive an iPhone 14 Pro model for the holidays and didn't already get one, you're basically out of luck because they're gone until late December. Subscribe to the MacRumors YouTube channel for more ...
Read Full Article • 213 comments

Wednesday December 7, 2022 12:24 pm PST by Juli Clover
With the iOS 16.2 release candidate that came out today, Apple added the new Apple Music Sing feature that was announced earlier this week. We thought we'd check out the new karaoke feature to see how it works. Subscribe to the MacRumors YouTube channel for more videos. Apple Music Sing is available on modern iPhones and iPads, as well as the newest Apple TV 4K. It's built in to the Apple...
Read Full Article • 122 comments

Thursday December 8, 2022 7:05 am PST by Joe Rossignol
iOS 16.2 is expected to be released next week following nearly two months of beta testing. With last-minute additions like Apple Music Sing and Advanced Data Protection, the software update now has over a dozen new features for the iPhone. Below, we've recapped many of the new features coming with iOS 16.2, including Apple's new whiteboard app Freeform, two new Lock Screen widgets, the...
Read Full Article • 79 comments