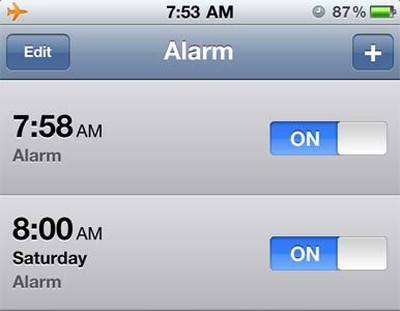 The work around for now is to set up the alarm as a recurring event. 9to5Mac claims that the problem corrects itself after January 3rd. In the meanwhile, be aware if you use your iPhone as your alarm clock.

Apple spokesperson Natalie Harrison confirmed to Macworld that Apple is aware of the problem. "We're aware of an issue related to non repeating alarms set for January 1 or 2," Harrison said. "Customers can set recurring alarms for those dates and all alarms will work properly beginning January 3."

Friday June 18, 2021 9:41 am PDT by Sami Fathi
After a long wait, YouTube for iOS is officially gaining picture-in-picture support, allowing all users, non-premium and premium subscribers, to close the YouTube app and continue watching their video in a small pop-up window. In a statement to MacRumors, YouTube says that picture-in-picture is currently rolling out to all premium subscribers on iOS and that a larger rollout to all US iOS...
Read Full Article • 137 comments

Friday June 18, 2021 2:06 am PDT by Sami Fathi
Intel may see its market share fall to a new low next year, in large part thanks to Apple's decision to move away from using Intel processors in its Mac computers and instead use Apple silicon. Apple announced last year that it would embark on a two-year-long journey to transition all of its Mac computers, both desktops, and laptops, to use its own in-house processors. Apple is expected to...
Read Full Article • 153 comments