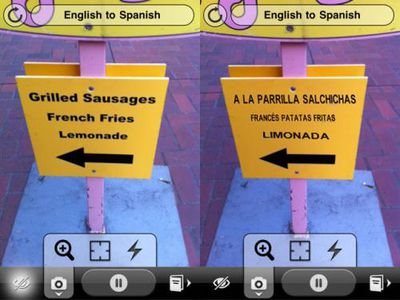 Last night, QuestVisual has released an eye-catching iOS app called Word Lens. Word Lens is an augmented reality app for the iPhone and iPod Touch (with video camera) which offers real time translation of text. You simply point your device's video camera at a sign and the program translates and superimposes the translated text onto the video in real time. The demo video shows it in action:
Word Lens is a free download to prove its real-time word detection algorithms. In the free version, users can reverse or blank-out text in real time. Meanwhile language packs for Spanish to English and English to Spanish are available for $4.99 each. More language packs are in the works. Translations are done on a word-by-word basis, so context is not taken into account. The translation is also done on-app, so no network connection is required.

Augmented Reality has been a much hyped possibility. Apple introduced the ability for developers to do this real-time video manipulation back in iOS 3.1.