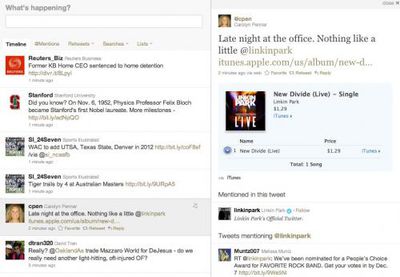 Starting today Ping, iTunes' new social network for music, and Twitter are making it even easier for people to share music discoveries with their friends by putting Ping activity, song previews and links to purchase and download music from the iTunes Store right in their Tweets on Twitter.com.

Once you've linked the accounts, whenever you Post, Like, Review, or tell your friends why you purchased a song or album on Ping, this activity will also be tweeted to your Twitter followers - complete with playable song previews and links to purchase and download music from iTunes.

Furthermore, those browsing Tweets sent via Ping on Twitter.com can click on the Tweet to see details on the song or album right on the page, complete with song previews in the 23 countries where Apple offers music via the iTunes Store.

Apple and Facebook have reportedly been in discussions about working together in some capacity, despite some early squabbles over Ping's apparently-unauthorized integration with Facebook Connect, a feature that was yanked within hours of Ping's debut in September. The two companies have apparently yet to strike a deal, however, to bring their services together in any form.

Friday November 25, 2022 4:40 am PST by Mitchel Broussard
Black Friday is winding down for 2022, but many Apple products are still seeing major discounts. In this article, you'll find every Apple device with a notable Black Friday sale. We'll be updating as prices change and new deals arrive, so be sure to keep an eye out if you don't see the sale you're looking for yet. Note: MacRumors is an affiliate partner with some of these vendors. When you...
Read Full Article • 32 comments