Fudzilla reported earlier today on comments made by AMD senior vice president and chief sales officer Emilio Ghilardi at the company's Financial Analyst Day presentation that are being interpreted as a possible revelation that Apple is set to adopt AMD's Fusion platform that combines CPU and GPU functions on a single die. But based on a viewing of the webcast (free registration required) of the event, we remain unconvinced of that notion, as it seems possible that Ghilardi was simply referencing Apple as a partner due to its usage of AMD's ATI Radeon graphics cards in several of its Mac products. 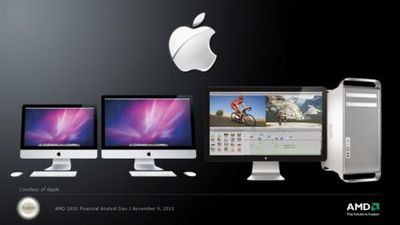 Slide from AMD's financial analyst presentation
Ghilardi's comments come just after the 5-minute mark in his presentation, and are accompanied by a quick run through a series of slides showing off products from their partners, including a slide depicting Apple's iMac and Mac Pro.

Now let's talk a moment about the things we've done together. In this chart you're going to see some of the great products that our partners have introduced into the market. Remember a year ago, I shared with you "Watch out in this space, there will be a bunch of new products entering the market in 2010, products that you've never seen before from AMD." All of these products have been fairly successful into the marketplace, and it is fair to say that we have never had this level of successful products in the marketplace.

Other companies' products featured on slides displayed during that portion of Ghilardi's comments include Acer, Asus, Dell, HP, Lenovo, Samsung, Sony, and Toshiba.

A report earlier this year claimed that Apple and AMD were in "advanced discussions" to bring the chipmaker's processor to future Macs.

Update: GigaOM has updated its article on the topic to include a statement from an AMD spokesman relating that slide was simply indicating Apple's current status as an AMD hardware partner. No claims regarding the potential adoption of AMD's Fusion platform were to be implied by the mention.