Apple Grabs 95% of Tablet Market as Competitors Ramp Up

Bloomberg reports on new data from research firm Strategy Analytics showing that Apple held a 95% share of the tablet market in the third quarter of 2010, leaving only 2.3% for Google's nascent Android platform.

Global tablet sales rose 26 percent from the previous period to 4.4 million units, with Apple selling 4.19 million iPads, the company said in a statement. Android's share of the market declined to 2.3 percent from 2.9 percent.

With a slew of high-profile companies just now preparing to enter the tablet market, however, Apple will soon face stiffer competition.

"The tablet wars are up and running," said Strategy Analytics Director Neil Mawston in the statement. Android and other operating platforms "are trailing in Apple's wake and they already have much ground to make up."

A new survey from ChangeWave Research has taken a crack at assessing customer interest in the tablet market, finding its target audience of professionals and early adopters still iPad-focused, with 80% of those surveyed saying they would be most likely to purchase an iPad. Research in Motion's PlayBook, set for launch next year, ranks second with 8% of customers looking to purchase one. 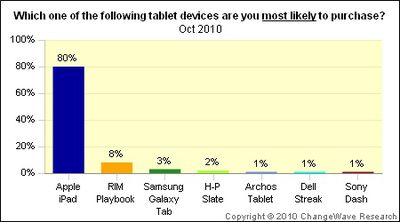 ChangeWave also found that iPad owners in its survey group are very pleased with the device, with 72% registering as "very satisfied" and an additional 23% as "somewhat satisfied".

Overall, ChangeWave has seen interest in netbooks flagging as tablets gain momentum, with only 13-14% of survey respondents over the past few months looking to buy a netbook, down from a peak of 24% in mid-2009.
[ 165 comments ]