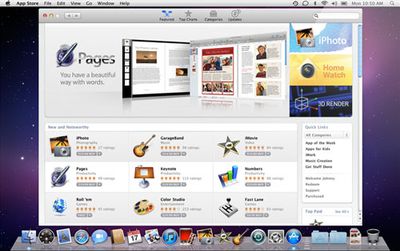 The most surprising news coming out of today's media event was the revelation that Apple would be launching a Mac App Store for Mac OS X. From the short preview that was given, the Mac App Store appears to be structured similarly to the popular iOS App Store. App sales and upgrades are all managed through the App Store, itself. Like the iOS App Store, Apple splits revenues with the developers in the same 70/30 ratio.

Given the massive success of the iOS App Store, Mac developers are understandably interested, but may run into hurdles with Apple's approval process. Andrew Welch of AmbrosiaSW told Informationweek that many of his company's existing apps would not be allowed in:

"Ambrosia is certainly interested in the idea of a centralized Mac application store," he said in an e-mail. "However the restrictions imposed by Apple on the applications may make it impossible for a number of our applications to be submitted."

Presumably, these apps would include their system utilities such as WireTap, Snapz Pro X and Soundboard.

We've heard that Mac App Store Apps are restricted from installing kernel extensions (kexts) that are frequently used to provide system level functions in these utilities. Apps, as well, must be self contained and avoid use of undocumented APIs.

Developers, of course, aren't required to distribute Mac apps through Apple's App Store. Developers can still distribute their software on their own, but the centralized access and publicity of the App Store model has been well proven on iOS. The Mac App Store also raises additional questions whether or not the so-called "race to the bottom" in prices will be duplicated on the Mac software side as well, and whether or not it will encourage simpler, more casual apps.