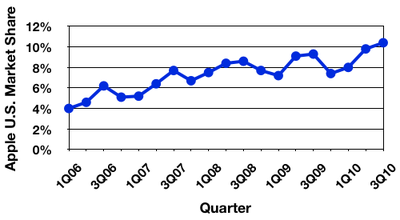 Apple had another strong quarter. Increasing traffic to Apple, associated with the iPad release (iPads are not included in Gartner's PC shipment statistics), as well as iMac and Mac Pro refreshes, contributed to the growth.

According to Gartner's report, Apple placed fourth among U.S. computer shipments with a 10.4% market share on unit growth of 13.7% over the year-ago quarter. The performance fell just short of Acer's third place showing at 10.5% and was up from the previous quarter's 9.8% and from 9.3% in the year-ago quarter.

"Media tablet hype around devices such as the iPad has also affected consumer notebook growth by delaying some PC purchases, especially in the U.S. consumer market. Media tablets don't replace primary PCs, but they affect PC purchases in many ways," Ms. Kitagawa said. "At this stage, hype around media tablets has led consumers and the channels to take a 'wait and see' approach to buying a new device."

Despite Apple's strong performance in the U.S., the company was unable to break into the top five computer manufacturers on a worldwide basis, where Asus and Toshiba battled over the fourth and fifth spots at 5.4% and 5.3% shares respectively.

"Apple's influence on the PC market continues to grow, particularly in the U.S., as the company's iPad has had some negative impact on the mininotebook market. But, the halo effect of the device also helped propel Mac sales and moved the company into the number three position in the U.S. market," said Bob O'Donnell, IDC vice president for Clients and Displays.

Wednesday November 30, 2022 12:43 pm PST by Juli Clover
Twitter CEO Elon Musk today met with Apple CEO Tim Cook at the Apple Park campus in Cupertino, California, according to a tweet shared by Musk this afternoon. Musk thanked Cook for taking him around Apple's headquarters, with no mention of what the two might have discussed. The meeting comes just after Musk on Monday claimed that Apple has "mostly stopped" offering ads on Twitter, and that...
Read Full Article • 376 comments