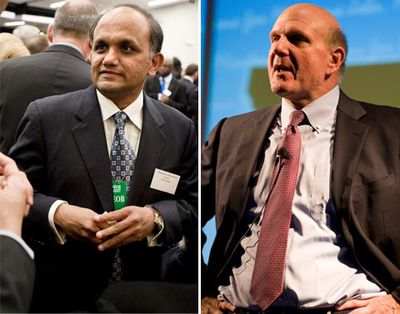 Adobe CEO Shantanu Narayen (left) and Microsoft CEO Steve Ballmer (right)
The New York Times reports that Microsoft CEO Steve Ballmer and other executives recently held a secret meeting with Adobe CEO Shantanu Narayen to discuss a number of topics, including how the two companies might work together to take on Apple in the mobile industry, as well as a possible acquisition of Adobe by Microsoft.

The meeting, which lasted over an hour, covered a number of topics, but one of the main thrusts of the discussion was Apple and its control of the mobile phone market and how the two companies could partner in the battle against Apple. A possible acquisition of Adobe by Microsoft were among the options.

One source indicates that representatives of the two companies discussed Apple's refusal to support the viewing of Flash content on its mobile devices and how a partnership between the companies might offer them additional leverage against Apple's gains in the sector.

A second source reveals that executives revisited the possibility of an acquisition of Adobe by Microsoft, a proposal that was briefly floated several years ago before being abandoned over fears that the merger would not pass muster under antitrust regulations. With the growth of Apple and Google, however, those concerns may be less now than they were at the time of the initial discussions.

Adobe's stock is currently up over 10% on the rumors of a Microsoft acquisition.