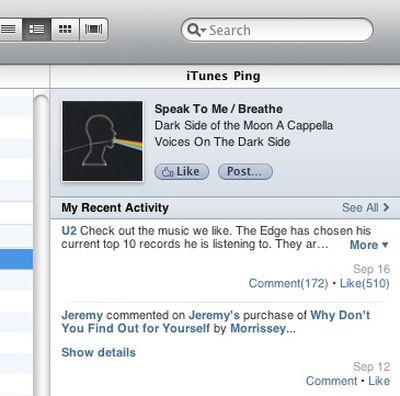 Following changes to the iTunes Store terms and conditions yesterday that referred to a "Ping Sidebar" for Apple's music-focused social networking platform, Apple has now released iTunes 10.0.1 to enable the new feature and distribute a number of bug fixes.

iTunes 10.0.1 makes it easier to share your favorite music with your friends on Ping. You can now Like or Post about music right from your iTunes library. You can also easily see the recent activity of a selected artist in your library, or of all artists and friends you follow on Ping using the new Ping Sidebar.

This release also provides a number of important bug fixes, including:

The new Ping functionalities increase the integration of the social networking service with users' iTunes libraries, offering users at-a-glance access to activity from artists and people they follow on Ping. The update also provides dropdown menus next to each song in a user's library to allow them to like or comment on each track and provide quick access to iTunes Store searches for the song, artist, and genre, as well the artist's Ping profile if available.