One week ago, Apple announced changes to its App Store rules regarding app development using third-party tools, also moving to provide an open look at the guidelines for the app review process. Together the moves appear to have significantly lifted the veil of secrecy over the App Store review process and offered a broader array of developers the opportunity to access the iOS platform. 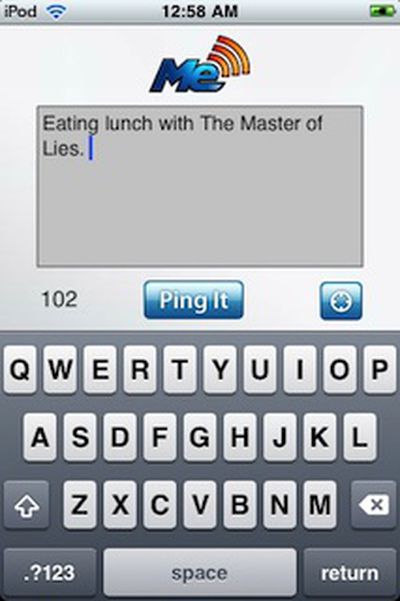 Bryan Bartow's MePing application
The Los Angeles Times reports on some of the developers who have been pleased to see their long-stalled app submissions suddenly come back to life with Apple's new, more developer-friendly philosophy.

Bryan Bartow, a software developer in Austin, Texas, invented an iPhone application he called MePing and submitted to Apple Inc. in March.

Six months later, it was still in limbo, neither approved nor rejected.

"It just waited in review forever," Bartow said. "I just assumed it wasn't going to be approved, and moved on."

Then, last week, Bartow got a surprise e-mail from Apple. MePing had been approved.

"It magically came through," he said.

Several other developers who had ported their Flash-created apps to iOS and submitted them to Apple months ago are also noted as having seen sudden approvals finally coming through in the past week.

Soon after Apple's announcements, we reported on Sean Kovacs, whose GV Mobile application offering an interface to Google Voice had been pulled from the App Store in summer 2009 for "duplicating features that come with the iPhone". Under the newly-public App Store review guidelines, Kovacs noted that he felt that his application complied with all rules and had received word from Apple that his application would likely be approved if he resubmitted.

Screenshots of GV Mobile+, currently under review by Apple
Kovacs did just that, and his new GV Mobile+ application is now awaiting approval from Apple. We've taken a look at the newly-revamped application now in Apple's hands, and it seems to offer a highly-polished interface for Google Voice users.
[ 35 comments ]