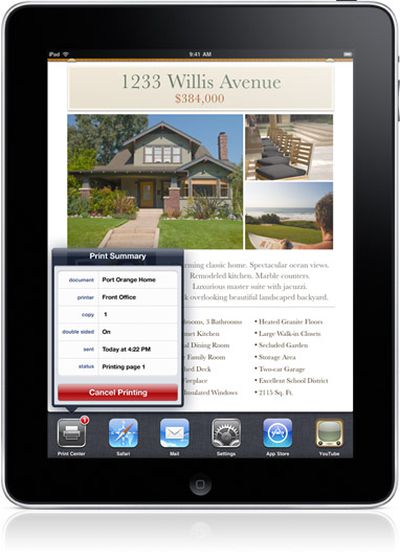 Alongside today's developer release of the first beta version of iOS 4.2, Apple issued a press release officially announcing the AirPrint feature that will allow iPads, iPhones, and iPod touches running iOS 4.2 to support wireless printing directly from the devices. HP will be the first to offer AirPrint compatibility with its ePrint line of printers.

Apple today announced that it is releasing a beta version of its AirPrint wireless printing for iPad, iPhone and iPod touch to members of Apple's iOS developer program today, and that AirPrint will be included in the free iOS 4.2 software update in November. AirPrint automatically finds printers on local networks and can print text, photos and graphics to them wirelessly over Wi-Fi without the need to install drivers or download software. HP's existing and upcoming ePrint enabled printers will be the first to support printing direct from iOS devices.

Apple's Phil Schiller notes that AirPrint will require no user configuration, no drivers, and no additional software, allowing users to simply tap to print photos and documents on compatible printers.

AirPrint will be compatible with the iPad, iPhone 4, iPhone 3GS, and iPod touch second-generation and later, leaving out the iPhone 3G among iOS 4-compatible devices.