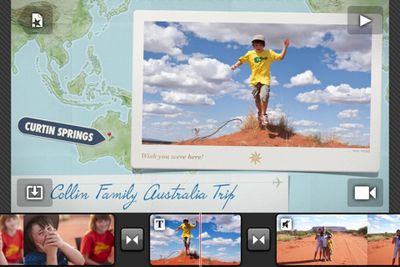 With the new fourth-generation iPod touch launching today, Apple has released an update to its iMovie application for iOS, adding compatibility for the new device to the existing support for iPhone 4. The updates also adds several new features, including the ability split video clips, automatic music looping, and more.

iMovie, priced at $4.99, debuted in late June for the iPhone 4, offering users the ability to edit footage shot on their devices without having to transfer it to a computer. A number of filmmakers quickly demonstrated how films could be easily shot and edited entirely on the iPhone 4.

Friday May 27, 2022 2:15 pm PDT by Juli Clover
There's just over a week to go until the 2022 Worldwide Developers Conference, which is one of the biggest Apple events of the year. We've heard surprisingly little about iOS 16 this year, so we're in for some major surprises when June 6 rolls around. As we wait for the keynote event, we thought we'd share some iOS 16 wishlist items from MacRumors readers, because who knows? We just might...
Read Full Article • 247 comments

Friday May 27, 2022 6:54 am PDT by Hartley Charlton
The "A16" chip for the iPhone will reportedly be manufactured with the same process as the iPhone 13's A15 Bionic, with Apple saving a bigger performance leap for the "M2" chip designed for its next-generation Macs. Meanwhile, the company is working on a "final" M1 chip variant that uses more powerful cores from the A15, according to the leaker known as "ShrimpApplePro." In a thread on...
Read Full Article • 161 comments