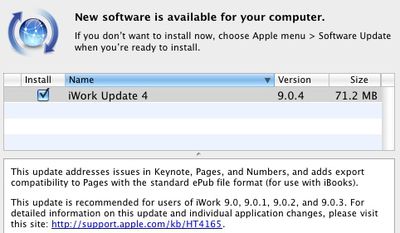 Apple today released iWork 9.0.4, bringing a number of fixes to Apple's productivity suite but also deploying a new feature: the ability to export Pages documents in the ePub format for compatibility with the company's iBooks application for iOS.

Pages 4.0.4
- Fixes an issue with tables.
- Includes compatibility with the standard ePub file format (for use with iBooks) when exporting.

Apple has also posted a support document offering advice on how to choose between ePub and PDF for a given document and outlining how to create an ePub file from a Pages document.