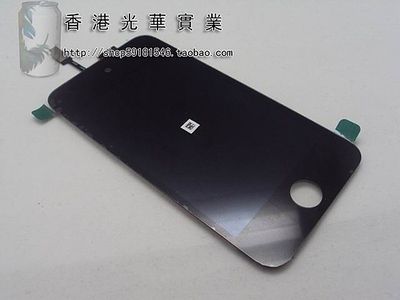 Leaks of claimed next-generation iPod touch parts continue to surface, further bolstering speculation that Apple is preparing to launch new models with front-facing cameras to allow for FaceTime video calling. The latest leak comes via M.I.C. gadget, which reveals another LCD/front panel assembly on sale for approximately $95 at a Chinese e-commerce site.

The part clearly shows a front-sided hole that would leave room for a front-facing FaceTime camera, and the part is labeled "Apple (c) 2010".

An iPhone parts supplier is responsible for the store, and this supplier claimed that they got these parts through a "special channel", maybe this is the iPod touch 4th generation prototype which is leaked from the factory.

Just two weeks ago, we received images of a similar assembly also bearing Apple branding on the ribbon cable. The styling of the branding differs slightly between these two samples, however, with the earlier version utilizing two lines of text for the "Apple" brand and dating while the new version presents the text on a single line. Our earlier sample carried a production date of April 2010 stamped on the back of the LCD, while the new version appears to carry only a serial number.

Apple is widely expected to introduce new iPod touch models sometime in the next month or two, with recent claims pointing to a mid-September media event for their debut. Recent betas of iOS 4.1 have suggested that Apple will be utilizing email addresses as options for FaceTime video call initiation, allowing non-iPhone iOS devices such as the iPod touch and iPad to utilize the feature should they receive video camera capabilities.
[ 108 comments ]