HTML5, the Web standard promoted by Apple in favor of Flash as the future of media delivery on the Internet, is continuing to gain support among popular Web sites and services. In particular, announcements from Yahoo! and Vimeo yesterday demonstrate the increasing adoption of the standard. 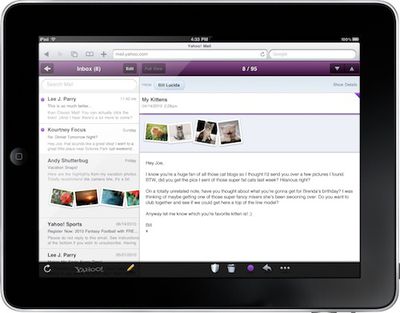 Yahoo! yesterday announced the launch of an HTML5-based Web mail interface newly customized for the iPad, bringing a number of enhancements.

If you've used our recently launched HTML5 mobile Web mail for iPhone you'll feel right at home. We've kept all the things users love about our new mobile Web mail experience, while also optimizing for the gorgeous large screen of the iPad.

Among the new features are local caching for offline access, improvements to searching and organization, enhanced attachment handling, and a dual pane view similar to that employed by the native iPad email application. Google launched a similar HTML5-based interface for Gmail on the iPad in April.

Since we rolled out the HTML5 player in January people have been clamoring for an embeddable version, especially for iPhones and iPads. Today we're taking a big leap forward for compatibility and updating our embed code. We call it the Universal Player.

The Universal Player is as easy to use as the old embed code, just a lot more compatible. Instead of being a direct link to a Flash player the new Universal Player can automatically detect what kind of device is viewing the video and choose the optimum player based on the device's capabilities. For example, it will serve mobile video to iPhones and Androids and HD to iPads and Desktops.

Vimeo launched support for HTML5-based video on its own site earlier this year, but the extension of HTML5 compatibility to embedded videos will significantly broaden users' ability to experience the site's content across the Internet.