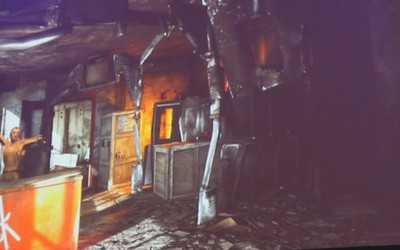 Screenshot of Rage on iPhone 4
Kotaku reports that during his keynote address at QuakeCon 2010 today, John Carmack of id Software showed off the company's forthcoming Rage game running at 60 frames per second on an iPhone 4, claiming performance beyond that of Microsoft's Xbox and Sony's PlayStation 2. The report includes a video clip showing Rage in action on the iPhone.

Carmack's demonstration, using the id Tech 5 engine, could possibly be the most impressive tech we've seen on the iPhone. Running on the iPhone 4 but easily run on the 3GS, the visuals indeed rivaled anything from the PlayStation 2 and original Xbox, and might even be able to give a few current-gen titles a run for their money.

The report notes that id will be releasing a minor "show off" title from the Rage franchise later this year, with a full version set to launch next year along with versions for other platforms.