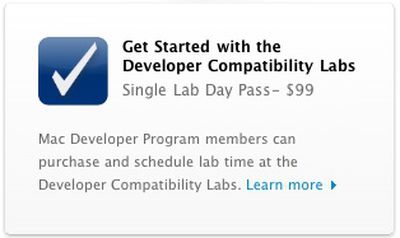 As noted by Macworld, Apple has launched a new day pass program offering access to the company's Developer Compatibility Labs for Mac OS X developers. The new day passes, priced at $99, offer users access to Apple's facilities in either Cupertino, California or Tokyo, Japan to test their software or hardware products with a wide range of Apple products to ensure compatibility.

The Single Lab Day Pass, as its name suggests, offers developers access to one of the labs - located in Cupertino and Tokyo - for one day, between 9:00 a.m. and 5:00 p.m. There are three separate labs at Apple headquarters in Cupertino, containing a truly enormous amount of Mac hardware, from recent versions of many models to older Power Macs, PowerBooks, and iBooks - they even have G4 cubes. Apple says it has more than 500 configurations on hand for compatibility testing, along with plenty of accessories and networking hardware.

A single pass is valid for up to ten attendees, all of whom must be registered Mac developers. Participants are of course also responsible for their own travel and lodging costs.