Android Outpaces iPhone in Share of New U.S. Smartphone Customers for First Half of 2010 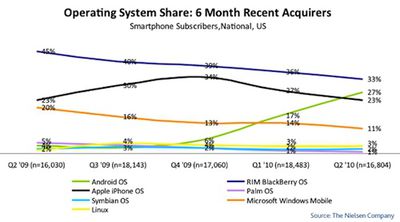 Taking into account total U.S. user base, however, Apple still leads Android, 28% to 13%. Both trail Research in Motion, which holds a 35% overall market share and 33% share of those customers new to smartphones in the first half of the year.

Earlier this year, NPD released somewhat similar data for the first quarter of 2010, claiming that Android handsets had outsold the iPhone in the U.S. Apple CEO Steve Jobs took exception to that and similar claims from others, pointing to Nielsen data at WWDC in early June showing Apple still holding a firm advantage over Android. The data shown by Jobs, however, was Nielsen's overall market share calculation for existing users, while NPD had been referring specifically referring to new sales of new smartphones. With today's release, Jobs' favored source Nielsen now agrees that Android has surpassed the iPhone in new purchases, at least among those who have not owned a smartphone before.

It is also important to note that the first half of 2010 primarily represented the back side of the iPhone's product cycle, with the iPhone 4 only making its appearance in the last few days of the period. The diversified Android platform, in contrast, saw several high-profile device launches in early 2010.

Today's survey from Nielsen also reveals that Research in Motion's lead may not hold up for long, however, as more than half of current BlackBerry owners surveyed are planning to defect from the platform with their next smartphone purchase, with 29% planning to move to the iPhone while 21% plan to pick up an Android-based handset. In contrast, 89% of iPhone owners plan to stick with the iPhone, while 71% of Android owners plan to stay on that platform.

Saturday February 4, 2023 10:05 am PST by Eric Slivka
Online retailer TigerDirect has slashed pricing on the M1 iPad Air in several colors, offering the base 64GB configuration for just $313.99 in Purple and Pink. Note: MacRumors is an affiliate partner with TigerDirect. When you click a link and make a purchase, we may receive a small payment, which helps us keep the site running. That's a savings of 48% compared to Apple's normal $599.00...
Read Full Article • 535 comments