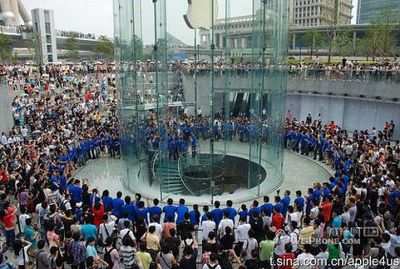 Apple's impressive new retail store in Shanghai, China opened today to large crowds. MICGadget provides a gallery of photos from the launch and the Wall Street Journal reports that 150 fans were waiting overnight to be the first in the Store.

Apple opened the doors of its second store in the entire country on Saturday, drawing crowds of all ages as early at 5 a.m. Some drove several hours or flew in from other provinces for a chance to line up outside the cylindrical glass building. Many hoped to catch a glimpse of the iPhone 4 or of Steve Jobs, but were disappointed.

Like the company's flagship store on Fifth Avenue in Manhattan, the Pudong store is located below ground level and utilizes the glass tower as an iconic entryway with a glass stairway descending to the store below.

Apple expects to open a second retail store in Shanghai and a total of 25 stores in China by the end of 2011.