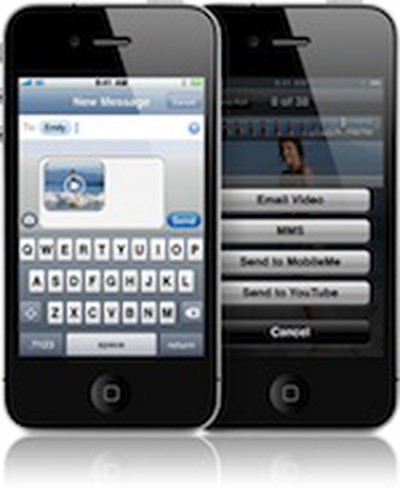 One of the key features of iPhone 4 is its ability to record high-definition video in 720p. Users have found, however, that getting the HD video off of the device requires connecting it to a computer for download. While Apple offers users simple options for sharing videos directly from the iPhone via email or MMS, or by uploading the videos to MobileMe or YouTube, those mechanisms result in compression of the files, losing significantly quality in the process.

MacDailyNews reports that one of its readers emailed Apple CEO Steve Jobs to ask about this issue and express disappointment at the inability to directly upload HD content to the web while on the go. In an email reply, Jobs notes that the ability to upload HD content over the air is coming "in the future".

You can upload them via a Mac or PC today. Over the air in the future.

While Jobs gives no timeframe for when we might see such a feature, it does give users looking for this capability some hope for the future. HD video uploads via 3G would obviously place a greater strain on carriers' networks and also eat further into customers' data limits. For that reason it might make sense for Apple to either roll out the feature as a Wi-Fi-only at first, and perhaps offering it via 3G further down the road with user-selectable options for varying export quality.

Tuesday June 15, 2021 3:41 am PDT by Tim Hardwick
Apple in iPadOS 15 has added the ability to access NTFS-formatted media from within the Files app. The additional support for the Windows-related format, first discovered by YouTuber Steven Fjordstrøm, is read-only, so like on macOS you can't modify files stored on NTFS devices, but you can at least copy any data on them for working on elsewhere on your iPad. The Files app has also gotten a...
Read Full Article • 100 comments