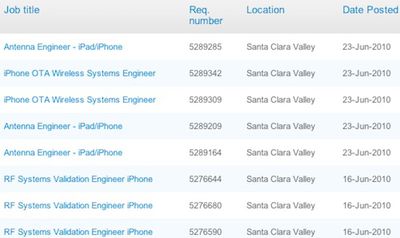 As noted by Engadget, Apple has been busy posting job listings for engineers to work on design and testing of antennas for the company's iPhone and iPad. While Apple typically posts a number of new job listings each day, the fact that the company has posted a total of eight antenna-related positions over the past two weeks naturally leads to speculation that it is beefing up its staff to investigate and deal with signal issues being experienced by iPhone 4 users.

The eight job listings comprise three separate job titles, with the most relevant being three "Antenna Engineer - iPad/iPhone" positions. The three listings, all posted on June 23rd, are looking for individuals with a high level of qualification including 10+ years of experience in RF technology and a preference for PhD-level training.

Responsibilities: Define and implement antenna system architecture to optimize the radiation performance for wireless portable devices. The candidate should be able to design antennas suitable for wireless handheld devices with excellent radiation performance, including TRP, TIS, SAR, and EMC. Work closely with other RF and antenna design engineers, mechanical and industrial designers, and EMC engineers to integrate the antenna design in our products.

It is unclear exactly what role these new hires might play in addressing the current issues, as it typically takes some time for a hiring process to run its course and new employees to arrive and get up to speed. The job listings could suggest, however, that the company is looking to bring on additional hands to work on designs and testing for future models as some of the unit's staff is absorbed in addressing issues with the current model.