At the iPhone 4's introduction at Apple's Worldwide Developers Conference, Apple made significant mention of the device's capabilities, noting that while the device carries only 5 megapixels in comparison to the 8-megapixel cameras that are becoming standard on the latest smartphones, the new iPhone offers a great deal beyond simple pixel count that contributes to superior performance.

With iPhone 4 now on the market, and samples of Motorola's new Droid X, introduced on Wednesday, coming available, objective camera tests for both still and video imaging have become possible using the latest devices.

Macworld performed a series of tests comparing iPhone 4 with its predecessor, the iPhone 3GS, as well as the Droid X, HTC EVO 4G, Samsung Galaxy and HZ35W, as well as basic Samsung and Sony point-and-shoot cameras. For video tests, the publication also threw in the Flip Video M2120. A series of images and videos was taken with the devices, and a blind evaluation of their quality was performed. 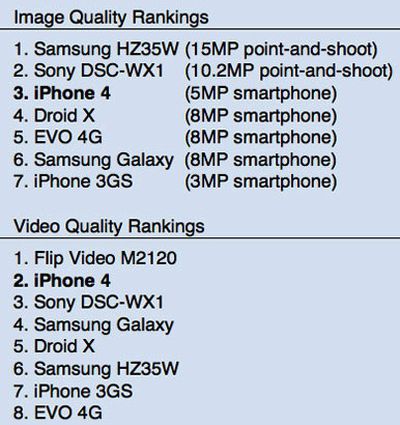 The iPhone 4 had, by a healthy margin, the best exposure and color scores of the entire bunch, beating out even the point-and-shoot cameras. It did run into trouble in the sharpness and distortion categories, performing much lower than the pocket cameras and similarly to the Droid.

For video quality, iPhone 4 topped all other smartphones, as well as the point-and-shoot camera, losing out only to the dedicated Flip Video camera.

While its image quality was impressive, it was the iPhone 4's video capabilities that really stole the show in our lab tests. Of the eight devices we rated for video, only the Flip Video M2120 scored higher. The Flip, which also records 720p, 30fps video, had just slightly better video quality than the iPhone 4, even in low-light.

Audio was a bit less impressive on iPhone 4, only matching the Droid X while the Samsung Galaxy took the top spot for smartphones behind the Flip camera.

Boy Genius Report has also performed a comparison of iPhone 4's HD video capabilities to those of Droid X, which both shoot in 720p. The report awarded top honors to Apple's iPhone 4, in part due to its superior framerate of 30 fps versus 24 fps for the Droid X.

Boy Genius Report's outdoor camera comparison
iPhone 4's use of the H.264 format also allowed it to achieve the better performance with file sizes less than half that of Droid X. Despite iPhone 4's overall victory, however, the study found that Droid X beat out iPhone 4 in both color accuracy and audio quality, somewhat disagreeing with Macworld's assessment on those aspects.
Boy Genius Report's indoor camera comparison
Related Forum: iPhone
[ 217 comments ]