Apple's Worldwide Developer's Conference wrapped up at the end of last week. The conference kicked off with a flurry of announcements surrounding Apple's new iPhone 4. The response to those who had actual hands-on time with the upcoming iPhone has been overwhelmingly positive with a particular focus on the high quality of the display. Several people we spoke to echoed Steve Jobs' comments that it will be hard to go back once you start using the 326 dpi display. 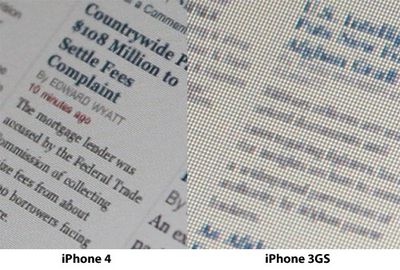 This weekend Robert Scoble posted high resolution photos comparing the new display to the existing one (iPhone 4, iPhone 3GS). The images clearly show the increased readability of web pages while fully "zoomed out". Macworld's hands on also echos the sentiment::

We placed an iPhone 3GS and an iPhone 4 side by side. The results were readily apparent. Text on the iPhone 3GS, while quite readable, showed noticeable pixelation. We couldnt pick out any pixels on the iPhone 4s text; as Apple claims, this screen really makes text look like something youd find in a book or a magazine, with none of the artifacts that weve come to expect from a LCD display.

Apple has claimed that the new display exceeds the limits of the human retina. While there has been some debate about the accuracy of these claims, at least one expert considers the claims close enough to reality.

For another point of reference, Apple provides this actual screenshot of an iPhone 4 screenshot. Click to see it at full resolution:

Click to see full resolution screen
Of course, this same image when viewed on an iPhone 4 shows the same number of pixels but within the space of a 3.5" display.

Meanwhile, iLounge has noted that the iPhone 4 supports 3G HSUPA (High-Speed Uplink Packet Access) for its uplink. iLounge cites a theoretical maximum of 5.76 Mbits/second. Meanwhile, the iPhone 3GS is limited to only 384kbps. Any faster uplink speeds will obviously help out in emailing high definition video clips over 3G networks.