AT&T Says iPhone 4 to Be Initially Available Only in Black? [Updated] 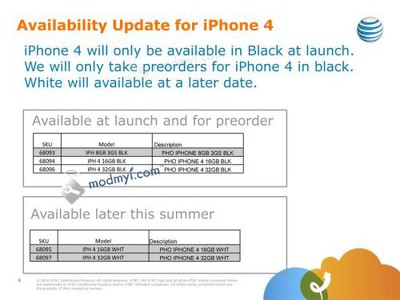 ModMyi reports that it has received a purported internal AT&T memo from a source revealing that the carrier will only be taking pre-orders for black iPhone 4 models, with white models not set to become available until "later this summer".

Apparently (see above image emailed to AT&T employees) the iPhone 4 will ONLY be available in black for pre-orders and launch. The initial lineup will be the 3G[S] in 8GB, and the black iPhone 4 at 16GB and 32GB.

The white 16GB and 32GB iPhone 4 will be available "later this summer."

It is unclear whether such restrictions would apply only to AT&T distribution or if it is a broader issue that will result in a delay of the sale of white iPhone models from Apple and other distribution points. No reason is given for the delay.

Apple is set to begin taking pre-orders for iPhone 4 tomorrow morning, but has not specified when its site will go live to accept sales.

Update: German site Macerkopf.de is reporting that Deutsche Telecom will also only be offering iPhone 4 in black at launch.

Friday July 30, 2021 9:04 am PDT by Sami Fathi
Tesla CEO Elon Musk reportedly once demanded that he be made Apple CEO in a brief discussion of a potential acquisition with Apple's current CEO, Tim Cook. The claim comes in a new book titled "Power Play: Tesla, Elon Musk and the Bet of the Century," as reviewed by The Los Angeles Times. According to the book, during a 2016 phone call between Musk and Cook that touched on the possibility of ...
Read Full Article • 256 comments

Sunday August 1, 2021 6:21 am PDT by Sami Fathi
Models of the Apple Watch Series 6 with titanium cases part of the "Apple Watch Edition" collection is currently widely unavailable for pick-up in several of Apple's retail stores in the United States and is unavailable entirely for delivery in major markets. Noted by Bloomberg's Mark Gurman in the latest edition of his "Power On" newsletter, titanium models of the Apple Watch Series 6,...
Read Full Article • 110 comments

Saturday July 31, 2021 12:13 am PDT by Tim Hardwick
Telegram Messenger has received a major update to its video capabilities, including support for video calls with up to 1,000 viewers. Group video calls in Telegram allow up to 30 users to stream video from both their camera and their screen, and now a maximum of 1,000 people can tune into the broadcast. Telegram says it intends to continue increasing this limit "until all humans on Earth...
Read Full Article • 53 comments

Saturday July 31, 2021 6:00 am PDT by MacRumors Staff
This week saw an interesting range of Apple news and rumors, including a blockbuster earnings report, rumors about next year's "iPhone 14" and Face ID coming to Macs, and more. Subscribe to the MacRumors YouTube channel for more videos. Other popular topics included Apple's crackdown on leaks, changes in the latest round of betas for iOS 15, iPadOS 15, and macOS Monterey, and several stories...
Read Full Article • 47 comments