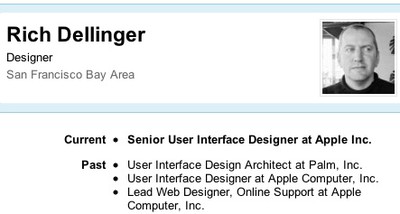 PreCentral.net notes that Rich Dellinger, a former user interface designer at Apple who left in 2006 to join Palm and subsequently developed the banner notification system used in webOS, has returned to Apple. In addition to his contributions to notifications, Dellinger's other work at Palm included:

webOS notifications
Dellinger is the latest in a string of high-profile departures from Palm in wake of HP's acquisition of the company. He has taken on a job title of "Senior User Interface Designer" at Apple, although it is unclear exactly what projects he will be working on. He previously worked at Apple from 1999 through 2006 in a variety of capacities, initially focusing on technical support engineering and a revamp of the company's online support site before moving to user interface design for Mac OS X, iPhone and iPod.
[ 123 comments ]