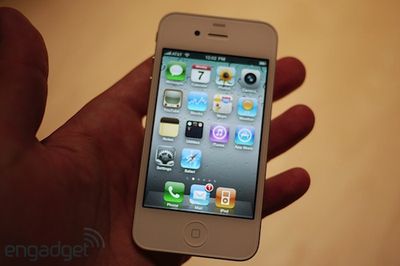 Engadget posts a number of photos of the new device, as well as a video showing the new FaceTime video calling feature in action.

Some takeaways about the device:

- As we said, it's shockingly thin.
- The screen is truly outrageous -- you basically cannot see pixels on it. We're not being hyperbolic when we say it's easily the best looking mobile phone screen we've ever laid eyes on.
- The build quality is really solid. The home button feels much snappier, and on the whole it just feel like a tightly-packed device, but it's not heavy.
- The side buttons are really nice and clicky.
- iOS 4 is very familiar -- there's not a lot added to fit and finish.

Ars Technica also has a number of photos and notes the new iPhone "feels good in the hand" and is very speedy, on par with the iPad as a first impression.

The iPhone's 960 x 640 Retina display has predictably been garnering quite a bit of attention, with Daring Fireball's John Gruber noting that it "looks insane in person" and gdgt's Ryan Block "in complete awe" over the "unbelievable" screen.

Recombu has also posted another nice photo gallery showing off the Apple's latest and greatest iPhone.

whats dah thing over the front cam and speaker.


Do you know what an iPhone is?
Score: 1 Votes (Like | Disagree)

What is the switch at the top left above the +/- buttons?


do you know what an iphone is?
Score: 1 Votes (Like | Disagree)

You should reconsider green over black too.;)

No 64GB option.
No price drop.
Wifi only and iPhone to iPhone only video chat.
Virtually identical to the Gizmodo leak that 1000s of people here hated.

A good phone but outclassed by the Evo 4G in almost every way. Screen does seem impressive though,

INDEED MY FRIEND. THE WHITE ONE LOOKED A LITTLE TO FEMININE AT FIRST, BUT THESE PICTURES MAKE IT LOOK PRETTY NICE. I'M RECONSIDERING WHITE OVER BLACK!...


You should reconsider green over black too.;)
Score: 1 Votes (Like | Disagree)
Read All Comments

Friday December 2, 2022 10:54 am PST by Juli Clover
Google is continuing on with its attempt to convince Apple to adopt the RCS messaging standard, publishing a new "it's time for RCS" blog post. Promoted heavily by Google, RCS or Rich Communication Services is a messaging standard that is designed to replace the current SMS messaging standard. It provides support for higher resolution photos and videos, audio messages, and bigger file sizes, ...
Read Full Article • 561 comments