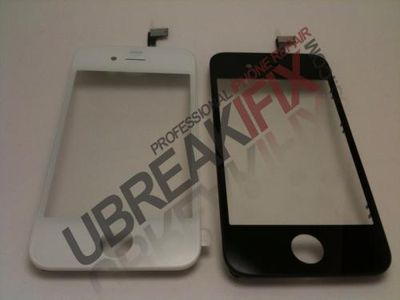 iPhone repair site uBreakiFix earlier this week claimed to have received next-generation iPhone front panels in both white and black. The parts appear similar if not identical to the ones that surfaced at about the same time on a Chinese e-commerce site.

Interestingly, the white front panels from both sources show a physical feature located above the earpiece. uBreakiFix suggests that the feature is the iPhone's proximity sensor, although current iPhone models' proximity sensors are hidden under the glass and nearly invisible unless viewed under bright light. More curiously, neither the black front panel parts from these sources or the prototype next-generation iPhones that surfaced over the past month or so seem to share this physical feature.

Meanwhile, with this week's appearance of white front panels, observers have been interested in seeing what such a next-generation iPhone would look like fully assembled. While Apple has offered white versions of certain iPhone models since the introduction of the iPhone 3G in 2008, the color has been limited to the back side of the device's body.

White next-generation iPhone rendering from Seraphan
One set of renderings has been gaining publicity over the past couple of days in light of the possibility of an all-white model. The renderings were first posted as part of a set from user "Seraphan" at Italian site iSpazio. Notably, the renderings were published on April 23rd, well before claims of an all-white iPhone surfaced, but they are based on the next-generation iPhone protoype design that surfaced just days prior to their publication.
[ 158 comments ]